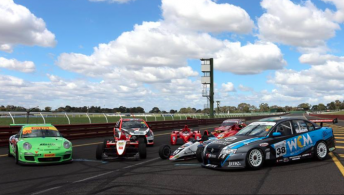 CAMS has held a constructive summit with six national categories following its recent takeover of the Shannons Nationals.

CAMS asked categories at the meeting for feedback regarding a range of aspects including calendar length, race formats and the television package.

The meeting also saw confirmation of the appointment of Graham Sattler, who has spent recent years as the sponsorship communications manager at Brad Jones Racing, to the role of Shannons Nationals operations manager.

Cameron McConville, who oversees CAMS’ motorsport department, declared the meeting a success with all categories present committed for 2016.

The next stage will see CAMS plot a calendar featuring a minimum of five events, which is expected to be in draft form next month.

“We had the stalwarts of Shannons over the last four or five years attend and they are certainly very positive and keen to remain on the calendar,” McConville told Speedcafe.com.

“It was just an opportunity to see what they wanted as far as rounds are concerned and discuss a very early version of the calendar.

“It was received really well everyone was positive about it and it has given us something to work with so we can go away and start to lock in some dates.

“It (the Shannons Nationals) is a very sustainable model and its worked well in the past.

“We are really not expecting any major departures from that model, just some small tweaks in regard to TV, the look of the paddock and operations.”

McConville added that CAMS is keen to speak with other categories that may want to join the Shannons Nationals bill.

“We certainly want to ensure that are other categories that may or may not have run with Shannons in the past that we want to have discussions with to see if there is any interest (in coming on board),” he said.

“It was more about them (CAMS) trying to get feedback from us,” he said.

“We’ll have to wait and see what they do with that information and what they come back with by the end of the season.”

Despite losing their championship status and being demoted a state level series from 2017 in CAMS’ recent Australian motorsport review, Australian F3 remains committed to the Shannons Nationals.

“They (CAMS) have got some plans in the pipeline to increase the presence of the Shannons Nationals through television.

“There was total co-operation by all parties and they have some good plans going forward.

“Everyone agreed that the status quo of the Shannons Nationals should continue, it is not broken so it doesn’t need fixing.”

No representatives of the Australian Formula Ford Series, which currently runs with the Shannons Naitionals, were invited to the meeting.

McConville however says CAMS is keen to see the open-wheelers feature in a proposed national motor racing ‘festival’ event.

“We haven’t had any discussion with Formula Ford to see if they want to run at a festival,” added McConville.

“I’d like to have a discussion with them to see if they can be involved.

“Clearly there has been some heat with this review but I’d like to think when the dust settles we can have a discussion.”

Organisers of the Australian Formula Ford Series, which CAMS has banished to state level competition next year, are currently considering options to continue as a national series next year.