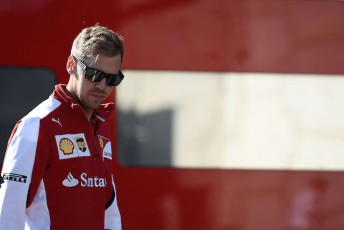 Sebastian Vettel has leapt to the defence of Ferrari over its gamble to run a one-stop strategy at the Belgian Grand Prix.

The four-time world champion suffered a tyre blowout on the penultimate lap at Spa while occupying third position.

The incident sparked a verbal attack from Vettel regarding Pirelli’s performance over the weekend.

The Italian tyre manufacturer responded to the German’s claims by stating the tyre was at the end of its life.

Pirelli boss Paul Hembery also suggested that Ferrari’s strategy to run a set of medium tyres for 28 laps was unexpected.

Vettel has since released a statement reiterating that Ferrari is not to blame for the tyre failure and that there was no risk in the strategy call.

“Just to make things clear: The team and I decided our strategy for the race together,” said Vettel.

“I support the team and the team supports me. And this is what makes us a team.

“Our strategy was never risky, at any point. The team is not to blame.

“We deserved to finish on the podium, but that’s racing; a different thing though is not to finish the race because of what happened.

“This is not easy to accept for a driver, even if it’s not as bad as in Silverstone a few years ago (when numerous blowouts occurred during the 2013 British Grand Prix).

“But still we need to talk to each other as it can’t happen without prior notice.”

The results from Pirelli’s investigation into the tyre failure are yet to be released.