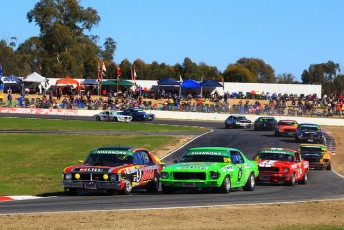 Andrew Fisher hopeful of a Bathurst return in his Falcon XY

Andrew Fisher has targeted a Bathurst Touring Car Masters return after being forced out of the recent Queensland Raceway round due to an engine failure.

The issue is set to see the Jesus Racing driver miss the showpiece Muscle Car Masters meeting at Sydney Motorsport Park next month while his team source a new engine for his Ford Falcon XY GTHO.

Lying fourth in the Touring Car Masters Pro-Am category, Fisher is in the process of acquiring an engine but remains confident he will be back for at the iconic Mount Panorama circuit in October.

The engine change will be the first part of Fisher’s plan to build an improved XY Falcon for next year following the purchase of a new lighter shell.

“We are the only car in the championship which runs a wet sump engine so we have got to go with a dry sump engine now after our other one let go at Queensland Raceway,” Fisher, who is competing in his first full year in TCM alongside a campaign in V8 Utes, told Speedcafe.com.

“We are in the middle of working through that process of building one at the moment and aiming to have something in the car for Bathurst but at the end of the year we will change everything over to a new shell, which will drop 170kg out of the car.

“It is important for us to be at Bathurst to have the XY on the track there but longer term we are building a bit of a screamer.”

Alongside the car show element there will be a series of precision driving demonstrations on the circuit featuring Fisher driving his V8 race Ute and his Touring Car Masters Falcon XY GTHO.

The event will have a family theme this year featuring several activities for children.

Fisher, who promotes his Bible Society Australia-backed Life Choices program through his racing, says the aim of the day is to open up his motorsport operation to fans.

The program sees the 48-year-old deliver his decision-making talk to more than 350,000 people every year.

“This year we are putting on a family day. We had a great car show last year, but with these things you always want to make it bigger and better,” added Fisher.

“This is just about community engagement. We like to stay close to the community. A lot of people say to me they don’t get the opportunity to get close and personal with race teams and race cars.

“The whole purpose of Jesus racing is about entertaining, engagement and challenging people’s paradigms about what we do, the Christian faith and that sort of stuff.”

For more information on the even visit www.jesusracing.com.au.