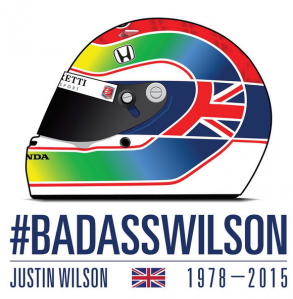 The entire IndyCar field will carry tributes to Justin Wilson at the series finale at the Sonoma road course in California this weekend.

Drivers will carry stickers on their helmets while cars will also display the special tribute graphic.

The sticker is the creation of motorsport livery designer Andy Blackmore.

IndyCar has also announced that fans will be able to purchase t-shirts and stickers of the logo design online later in the week with all profits going to the Wilson Children’s Fund in aid of his two daughters Jane, 7, and five-year-old Jessica.

Meanwhile organs donated by Wilson are set to be received by six patients.

The 37-year-old died a day after suffering a fatal blow to the head from debris dislodged from Sage Karam’s single-car crash at Pocono.