Darcy Ward to be transferred to UK

Darcy Ward to be transferred to UK 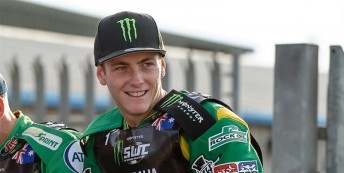 Darcy Ward will be moved to the UK in the next 24 hours to continue the injury analysis after his horrifying crash in Poland on Monday morning Australian time.

The Doctor of the young Queenslander’s Polish team, Zielona Gora, Robert Zapotoczny confirmed in a press briefing tonight Australian time that the double Under-21 World Champion would be moved to the UK in the coming hours.

“A transfer to a UK clinic is planned today. The flight will be in a few hours today (Wednesday EU time) or tomorrow morning,” said Zapotoczny.

Ward was involved in a major accident in the final heat race of Zielona Gora’s event Monday morning Australian time.

His father, George has joined Australian speedway riders, Chris Holder and Davey Watt at Ward’s side, along with his mentor and Poole Pirates Manager – Neil Middleditch and one of his closest sponsors and friends, Monster Energy’s Joe Parsons  – all of whom have been crucial in shaping Ward’s treatment post the horrific accident and the 2.5 hour surgery he underwent immediately afterward.

Further details as to the extent of Ward’s injuries – aside from a surgery for a wrist injury sustained in the crash – have been withheld. His mother is currently travelling to Europe to be beside him and the family has requested that until the family is together and a full picture available – no details are to be released.

“His (Ward’s) father gave no permission to reveal any specific information. George Ward asked me for forbearance because of the family’s pain,” added Dr. Zapotoczny.

Zapotoczny revealed Ward was in reasonable spirits with those close to him around him.

“The condition of Darcy is better than on Monday. His mental condition especially is better and he doesn’t need so much pain relief right now. Davey Watt and Chris Holder are constantly by his side to support him, so Darcy is even able to smile sometimes.”

An account for fans wishing to support Ward’s recovery is currently being established, with Holder this morning Australian time issuing a thank-you from Darcy to his fans and urging everyone to donate only to the official account once it is established:

“On behalf of Darcy Ward, he would just like to thank everyone for there support!,” said Holder through his Facebook page. “An account will be set up shortly for those who would like to donate towards his recovery. Please don’t donate to anything set up at the moment. Hold tight , (there) will be something set up by end of the week. Thanks again for all your well wishes #43″

In Poland – where Speedway is the national sport – fans congregated in their hundreds to chant Ward’s name outside his Hospital window and offer their well wishes, they also packed out a church that put on a special Eucharist service in Ward’s honour.