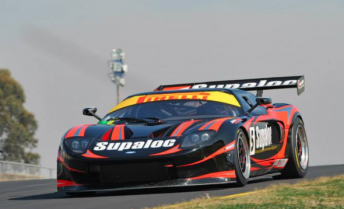 Kevin Weeks has been diagnosed with six broken ribs and a collapsed lung following his nasty crash during an Australian GT race at Sydney Motorsport Park.

The South Australian was transported to Sydney’s Westmead Hospital after suffering a violent impact with the wall at Turn 8 while disputing seventh place on the final lap of Saturday’s 60 minute encounter.

After complaining of chest pains, X rays revealed the extent of the 65-year-old injuries, which saw him spend three nights in hospital.

The former Australian Formula 2 champion, who is due to be discharged today, says he has very little recollection of the crash and the aftermath. 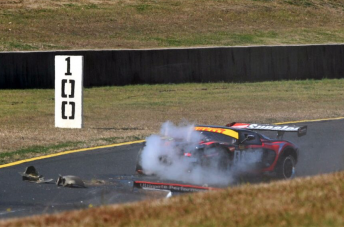 The aftermath from the crash at Sydney Motorsport Park

The incident caused severe damage to the Ford GT, he was sharing with Steve Owen, and it is unclear when he will return to the track or if the car will be repaired.

“I don’t remember any of it apart from going into the wall backwards at high speed thinking this is not going to be good,” Weeks told Speedcafe.com.

“The rest of it is a blank until I woke up in the recovery centre at Eastern Creek.

“I’m just going to give it a bit of time to catch my breath (before I make a decision about motor racing).”

Weeks is however buoyed by his recovery rate so far which has left him hopeful he will take part in planned charity cycle ride at the end of next month.

“I’m an extremely fit old bugger so I’m very surprised at the rate of my recovery,” he added.

“I’m a bit sore but that is motor racing I have been there before I know what it is like.

“I’ve got an 840km bike ride on September 22 so I got to prepare for that. I have got do that so this is a bit untimely.”

“Westmead (Hospital) did a wonderful job. They are lovely people here.

“Everyone has been very good to me and I’ve been treated very well.”