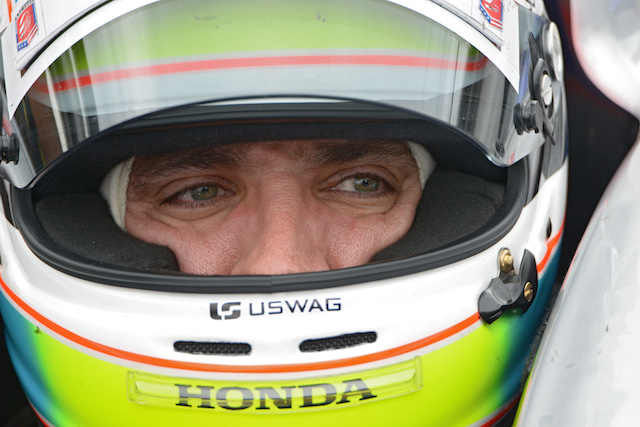 Justin Wilson was universally liked throughout the IndyCar paddock

Justin Wilson had become the well liked family guy on the IndyCar circuit.

Known as the gentle giant Wilson had a combined total between Champ Car and Indy starts for seven victories.

Speaking on behalf of fellow drivers, Ed Carpenter offered an insight into how much respect the IndyCar fraternity had for the 6ft4in (1.93m) Brit from Sheffield.

“It’s days like this that are extremely hard on all of us,” Carpenter said.

“We just want to offer our sincere condolences to Justin’s family, to his parents and especial Julia (wife), Jane and Jess (daughters) and Stefan (brother).

“Obviously Justin was a great professional driver and extremely good at his craft.

“Beyond that he was a great guy. One of the few if only guys that really was a friend among everyone in the paddock.

“Everyone respected (him) in the way that he carried himself.

“For what Justin has gone through over the past couple of years and how hard he worked to get back into the car this season and the opportunity he had at Andretti, I think he exemplified the reason we all love doing this.

“He fought so hard to back and as challenging as today is and yesterday was he’s doing what he loved to do and what we all love to do and why we will all be back competing in his honour in the near future.”

The Yorkshireman starred in junior ranks winning the 1998 Formula Palmer Audi title in England, before going on to claim the 2001 Formula 3000 crown, recording three wins and six second place finishes.

Before shifting his focus to America where he had been embraced by the entire IndyCar family, the lanky Wilson had finally cracked a Formula 1 drive with Minardi in 2003.

His management at the time lead by Jonathan Palmer started a crowdfunding scheme where investors had the opportunity to support his career which raised more than £1.2 million, enabling him to break into F1.

Wilson then replaced Antonia Pizzonia to become Mark Webber’s team-mate at Jaguar for the last five races of the 2003 season.

However, his F1 career was cut short with Jaguar opting to go with pay driver Christian Klien in 2004.

With Wilson’s grand prix dream coming to an end he signed with Champ Car team Mi-Jack Conquest Racing for 2004 before moving to RuSPORT the following year, which saw him win his first race in the series at Toronto.

After staying with RuSPORT, which was later the centre of a merger with Rocketsports in the final seasons of Champ Car, Wilson signed on with Newman-Haas Lanigan Racing in 2008, notching his maiden IndyCar Series win at Detroit.

Wilson was then forced to move to Dale Coyne Racing in 2009 before he cycled through Dreyer & Reinbold in 2010 and 2011 before switching back to Coyne from 2012 to last year.

In 2012 Wilson co-drove with Greg Murphy in the Armor All Gold Coast 600, having his first taste of a V8 Supercar.

Entering a part-time association in 2015 with Andretti Autosport, Wilson had been working on putting a deal together to earn a full-time spot with the squad in 2016.

Most recently Wilson finished second behind Graham Rahal at the Mid-Ohio race earlier this month.

Honda and Andretti had been strong allies and Wilson had been angling for a leap back into a full-time drive with the eponymous squad next year.

At age 37, Wilson leaves behind wife Julia and daughters Jessica, 5, and Jane aged 7.