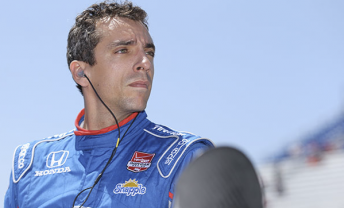 British IndyCar driver Justin Wilson has died from injuries sustained in a freak accident during the ABC Supply 500 at Pocono.

Wilson, 37, lost his life after being struck in the head by what appeared to be the nose cone dislodged from Sage Karam’s Chip Ganassi machine after he hit the wall heavily in a single-car accident.

“This is a monumentally sad day for IndyCar and the motorsports community as a whole,” IndyCar chief executive Mark Miles said.

“Justin’s elite ability to drive a race car was matched by his unwavering kindness, character and humility – which is what made him one of the most respected members of the paddock.

“As we know, the racing industry is one big family, and our efforts moving forward will be focused on rallying around Justin’s family to ensure they get the support they need during this unbelievably difficult time.

“He passed away in the company of his family his brother Stefan, his loving wife Julia and his parents Keith and and Lynn.

“Justin’s elite ability to drive a racecar was matched by his unwavering kindness, character and humility which made him one of the most respected members of the paddock.”

A trust fund has been set up to support Wilson’s daughters Jane, 7, and Jessica, 5.

Wilson’s family has since released the below statement.

“With deep sadness, the parents of Justin Wilson, Keith and Lynne, his wife Julia, and his brother Stefan share the news that Justin passed away today after succumbing to injuries suffered during the Verizon IndyCar event at Pocono Raceway on Sunday, August 23,” read the statement.

“Justin was a loving father and devoted husband, as well as a highly competitive racing driver who was respected by his peers.

“The family would like to thank the staff at the Lehigh Valley Health Network Cedar Crest Hospital, Pocono Raceway, Andretti Autosport, and the Verizon IndyCar Series as well as the entire racing community for the amazing outpouring of support from fans around the world.

“The family has requested that in lieu of flowers, donations be made to the Wilson Children’s Fund care of IndyCar.”

An Andretti Autosport statement read: “He was a tremendous racer, a valuable member of the team and respected representative to our sport.

“His life and racing career is a story of class and passion surpassed by none. Our thoughts and prayers remain with the Wilson family and fans worldwide.”

Tributes from around the motor racing community have already started to flow on social media.

Can’t even begin to describe the loss I feel right now. He was my Brother, my best friend, my role model and mentor. He was a champion!

So distraught to hear the news of Justin’s passing. He was such a fantastic human being & will be dearly missed. — Will Power (@12WillPower) August 25, 2015

My thoughts and prayers are with his family. #RIPJustin

RIP Justin. You were a pleasure to team with. A true professional. I have never been so saddened. Life is so fragile. pic.twitter.com/zQLcpCTcX8

I will miss you @justin_wilson so very much. I don’t have many heroes, but Stefan and Julia are among them after how strong they’ve been. — James Hinchcliffe (@Hinchtown) August 25, 2015

We ll miss u very much @justin_wilson .Thanks for everything you did for @IndyCar . Thoughts and prayers to Wilson family. #RIPJustinWilson

RIP @justin_wilson a badass driver with a soft heart, knew his roots and stuck by them. Thoughts with Julia and the girls and all family. — Guy Smith (@TheGuySmith) August 25, 2015

So sad to hear that we lost Justin Wilson today. Thoughts & prayers to his family and friends.

An absolutely horrible day in Motorsports. We will all miss the #BadAssWilson, what an incredible man. pic.twitter.com/nuMCRqAKul

Father, Husband, Friend, just an amazing human being. We will miss you to no end. Love to the Wilson Family. #RIPJustin

Really sad news. This is happening way too often. Thoughts with his family and friends #RIPJustinWilson

This sport can be so damn harsh. It breaks my heart. I wish Justin's family all my love and support

Last night a very good man left us. Mate. So sorry. RIP Justin My thoughts are with your loved ones.

#RIPJustinWilson, my thoughts are with his family and friends. So sad, difficult to accept.

I raced with Justin as far back as 1989 in Karting and remember his smile was infectious, such a lovely guy. #RIPJustin