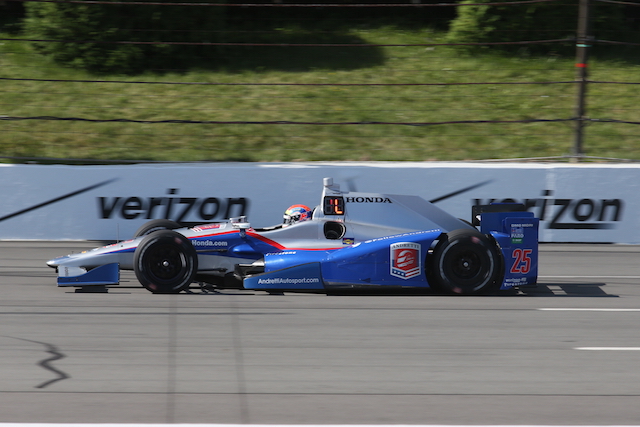 Popular IndyCar Series driver Justin Wilson remains in a coma in hospital after being struck in the head by debris during ABC Supply 500 at Pocono.

Wilson, 37, suffered a severe head injury after being hit by debris from a separate accident involving Sage Karam.

There is no other report on Wilson’s condition while he fights for his life in the intensive care unit at Lehigh Valley Health Network Cedar Crest Hospital in Allentown, Pennsylvania.

Karam, who was leading the race at the time he slammed into the outside wall, was released from the same hospital after being cleared of any broken bones in his right heel and left wrist.

The 20-year-old Karam will have further assessments before being cleared to start in this weekend’s series finale at Sonoma in California.

“First and foremost, I just hope everything is OK with Justin Wilson,” Karam said.

“Justin is the priority and everything else is secondary at this point. As far as the race, we had a really great race car and I felt comfortable and in a position to be in striking distance for the win.

“The car just unfortunately came around on me in the middle of Turn 1 and I had no indication it was about to go.”