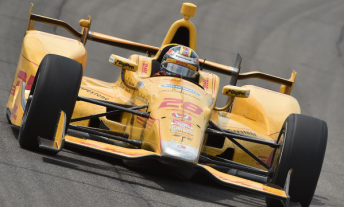 Will Power was fourth ahead of Carlos Munoz, Takuma Sato, Simon Pagenaud, Ryan Briscoe and Scott Dixon in ninth.

Earlier, title contenders Helio Castroneves crashed out on lap 167 of the 200-lap affair while Graham Rahal was taken out by Tristan Vautier just short of halfway but remains second in the points race.

With just over 20 laps remaining the race sunk to his darkest moment when leader Sage Karam crashed his Chip Ganassi machine heavily later being transported to hospital with a foot injury.

In the aftermath Andretti Autosport’s Justin Wilson, who came through several seconds after the impact appeared to be struck on the head by the nosecone from Karam’s car.

He was airlifted to Lehigh Valley Health Network Cedar Crest Hospital however officials had not disclosed the extent of his condition at the time of writing.

“It’s a tough one our thoughts and prayers are with Justin right now,” team owner Michael Andretti said.

Earlier issues for defending series champion Power saw him spin in pitlane and was slowly away following another stop which cost him valuable track position.

Amid the 12 caution periods, Marco Andretti crashed heavily on lap 139 when it appeared a failure in the car sent his car snapping wild left going into Turn 2.

Andretti was assisted from his car by a safety worker, favouring one of his ankles however he escaped any major injury.