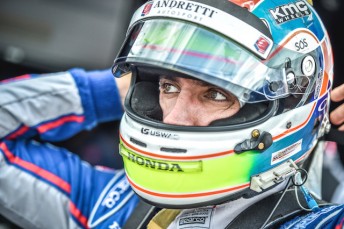 British driver Justin Wilson remains in a coma in a critical condition in hospital after being struck on the head by a large piece of debris at Pocono.

IndyCar officials have released the first statement regarding Wilson since the freak accident during the penultimate round of the series.

“Wilson is currently in a coma and in a critical condition while undergoing further evaluation at Lehigh Valley Health Network Hospital in Allentown, Pennsylvania.

“IndyCar sends its thoughts and prayers to Justin, his family and Andretti Autosport during this difficult time.

“Additional updates to Wilson’s condition will be released when available.

Wilson had been continuing a part-time season with Andretti Autosport.

The debris was a result of Sage Karam’s heavy incident moments before with the American driver taken by road to hospital with a lower leg injury.