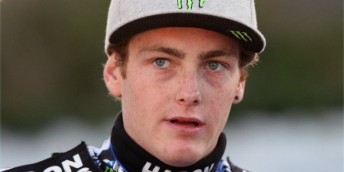 Australian Speedway international, Darcy Ward is under going spinal surgery after a nasty crash in Poland.

Riding for Zielona Gora in the Polish Speedway League, Ward gained drive and the front wheel lifted and cannoned him into the fence back first.

Poole Speedway, who own his British contract, confirmed the young Queenslander was rushed to hospital with no feeling in his lower body.

Former World Champion, Chris Holder – who has been close to Ward throughout his international career – has deferred his trip back to England after Polish Sunday league racing to be by Ward’s side. He will be joined by Poole Pirates Team Manager and Ward’s mentor, Neil Middleditch.

On Polish television, distressed Zielona Gora Manager, Jacek Fratczak confirmed that Ward was conscious after the crash however was in the hands of doctors.

“Middlo (Neil Middleditch) is going to be flying out to Poland in the morning, and I am happy to sanction that even though we have a meeting scheduled in the evening,” Ford said. “Neil has a very strong relationship with Darcy and it is important at times like this that Darcy has as much support as possible around him. Fans will probably not be surprised to learn that Chris Holder deferred his flight plans back to the UK so that he could divert to Zielona Gora to be with his good friend.

“There is not much that can be done other than to show Darcy that he has the support of everyone and I have been touched learning of the number of messages that have been flooding in for Darcy since the news began to filter through that his injuries were serious, but that is simply typical of the speedway family and the esteem that the riders are held in within our great sport, a sport that at times can be so cruel.”

Ward had recently made a return to the sport after an enforced layoff due to suspension and was in career best form.