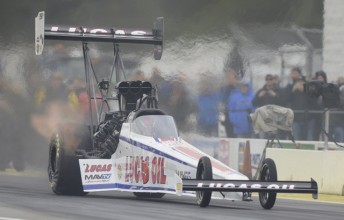 Richie Crampton on his way to victory (PIC: NHRA)

Getting the holeshot, Crampton swept to victory in a 3.695 second pass at 325.3mph to take his fourth victory of 2015 and sixth career NHRA major event trophy.

The win has moved Crampton into third in the points standings with just one more event to go before the Mello Yello Series goes into its ‘Countdown’ mode.

It was a history making weekend at Brainerd, with Antron Brown completing the quickest Top Fuel pass ever – a 3.680 and Matt Hagan set stunning new benchmarks for Funny Car in both elapsed time and speed – recording a blistering 3.879 second pass at 329.58mph.

Another Aussie, Steve Harker – competing in Top Alcohol Funny Car – was eliminated in the second round.