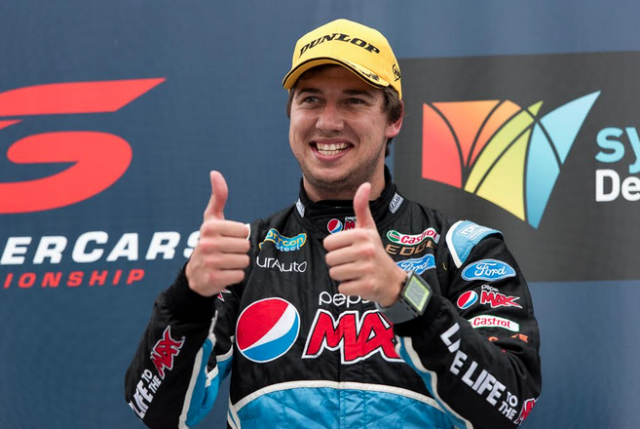 Mark Winterbottom believes team-mate Chaz Mostert is the favourite to win this year’s V8 Supercars Championship after the youngster’s sublime performance in Sydney.

Mostert ended all three qualifying sessions and races in the top three over a weekend that netted him two pole positions and two wins.

The results saw Mostert move to second in the standings, reducing the deficit to Winterbottom from 292 points entering the event to just 174.

Second and eighth in the opening two qualifying sessions and races, Winterbottom struggled to 12th in qualifying this morning before coming home 16th in the race.

“If he qualifies on pole all the time he’s in the right spot,” Winterbottom told Speedcafe.com of Mostert’s title threat.

“To win the championship you need to qualify at the front. (Craig) Lowndes (third in points, 255 from the lead) is a bit hit and miss.

“The team should win it either way, but we’ll see. I’ve not given up, but the pressure is on him (Mostert) now.

“The championship is in his hands. I’m just the old bloke cruising along.

“This car hasn’t suited me as well as it’s suited him but we’ll keep pushing,” he added.

“He’s qualifying on pole because he’s quicker. We (on car #5) have got to use our other strengths and work out how we can still win it.

“But if he wins it, he wins it. I’m not going to tear up about it. It just will be what it will be.”

Winterbottom and engineer Jason Gray have persisted with exploring their own set-ups in recent events, despite the obvious strengths of the car developed by Mostert and Adam de Borre.

“The smart thing to do would be almost copy his car at times, but it’s about how you drive,” said Winterbottom.

“This car suits his style and I’m still trying to adapt my style. This track is really hard to just pick up a different way of driving because the corners are so long.

“It was just a tough day, but even yesterday when we were second (in the opening race) I wasn’t happy.

“When we tune it we’ve got to make sure we don’t lose our strengths and create more weaknesses, which is sort of what happened today.”

Winterbottom’s Race 23 was made all the more challenging due to a mid-race incident at Turn 2 that left the #5 Ford with bent steering.

“Lowndes put me wide, sent me off the track and then Andre (Heimgartner) cleaned the steering up and I was just holding on from there,” he recalled.

“It was disappointing because the car wasn’t too bad but once the steering was bent that was it.”