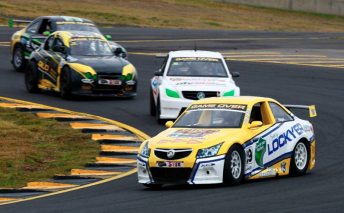 Brendon Pingel has won a wet final race of Round 4 of the Aussie Racing Cars Super Series at Sydney Motorsport Park.

Starting from the outside of the front row, Pingel lost the start and was soon fourth after dropping a wheel off the tarmac while exiting Turn 3 on the opening lap.

However, the championship leader worked his way into the race lead by the time the Safety Car was called for a lap 2 incident.

While briefly headed by James Duckworth, who appeared to jump far too early at the restart, Pingel ultimately ran away with the race after also taking the spoils in Race 2.

Race 1 winner James Abela was fastest off the line and led by the end of the first lap after briefly trailing Chris Stevenson, but had to be content with second place, ahead of Adrian Flack.

His exploits were nevertheless sufficient for the round victory, having made greater inroads than Pingel in the reverse grid Race 3.

Tony Quinn won that affair after running down Adam Casuccio, who had led for the bulk of the first six laps, while Abela made his way to ninth and Pingel 14th.

Round 5 of the series supports the Supercheap Auto Bathurst 1000 from October 8-11.