Ogier clears out in Germany

Ogier clears out in Germany 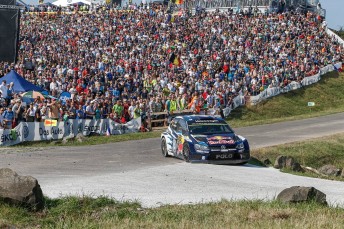 Ogier is chasing his first win in Germany since 2011

Sebastien Ogier has once again showed his class by extending his margin during the second leg of Rallye Deutschland.

Through the closed sealed roads of the Panzerplatte Military complex he crushed team-mate Jari-Matti Latvala. Through both runs of the marathon speed test on the Baumholder ranges he extended his overnight lead to 33.8sec with four tricky stages in the Mosel vineyards remaining tomorrow.

Ogier’s lead stood at 9.0sec as the rally ventured onto the daunting tank training tracks for the first time in the morning. On roads ranging from smooth asphalt to broken concrete, lined by huge kerbstones normally used to keep tanks in line, the Frenchman was supreme.

He won both the 45.61km test and the preceding two sprint stages to more than double his lead to 18.5sec. His performance on the afternoon pass was even more stunning, blitzing Latvala by more than 15sec to extend his lead beyond half a minute.

“It was a perfect day,” said Ogier.

“We made most of the difference in Panzerplatte and that was the key to the rally. We had the right set-up and tyre management, but it’s never easy without split times because you never know where you are with the rhythm.”

Andreas Mikkelsen was third, a further 1min 13.7sec back to retain Volkswagen’s 1-2-3 with the Polo R car on its home event.

Hyundai team-mates Dani Sordo and Thierry Neuville duelled for fourth in their i20 cars. Neuville moved ahead this morning but despite gearchange problems when shifting down from second to first, Sordo regained the initiative to end 9.5sec ahead of the Belgian.

Elfyn Evans completed the top six in a Ford Fiesta RS, the Welshman feeling he may have been too aggressive with his tyres. He was only 3.2sec ahead of the closing Mads Østberg, the Norwegian relegating Ott Tänak and Hayden Paddon.

Paddon was perplexed by his below-par performance until a faulty turbocharger was diagnosed in his i20.

“We had some set-up issues, which made it difficult to drive the car and wasn’t a great confidence-builder,”said Paddon.

“We tried to improve in the afternoon but it transpired that we had a turbo problem, which we didn’t realise at service. It helped to explain some of the time loss because we had carried the problem from the first stage and it was getting progressively worse.

“We will look at everything with the team tonight and hopefully there’ll be more to come tomorrow morning.”

Two identical loops of two stages covering 67.34km remain on the final day, the rally ending with the live TV Power Stage and bonus points for the fastest three drivers.