No penalties for Bright or Van Gisbergen

No penalties for Bright or Van Gisbergen 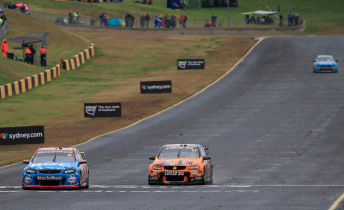 Bright and Van Gisbergen battle in the closing stages

Jason Bright will keep his podium finish in Race 23 after stewards determined that the Team BOC driver did not breach the rules in short cutting the circuit.

Spun at Turn 4 by Van Gisbergen while the pair battled for third in the closing stages, Bright cut three corners and over a kilometre of track when rejoining at Turn 8.

Both drivers argued post-race that no penalties should have been levied, citing David Reynolds’ shortcut at Hidden Valley as a precedent.

CLICK HERE for more from Van Gisbergen and Bright.

Investigating Officer Jason Bargwanna looked into today’s clash and the shortcut before determining that no breaches had occurred.

The only points penalty from today’s chaotic race went to Tim Slade, who has been deducted 15 points for contact with Dale Wood at Turn 1.