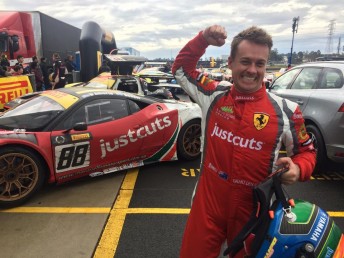 The Maranello Motorsport driver held fourth position in the early stages of the race interrupted by two Safety Car periods as several cars were caught out by slippery track conditions.

However, a quick decision to pit under the second Safety Car saw him emerge in a strong position, before he charged to the front where he stayed for the remaining laps.

In the end, television personality Denyer guided his Ferrari 458 to victory by a comfortable 15s margin from the McLaren 650S of Klark Quinn.

Quinn had been involved in a thrilling scrap with Hayden Cooper’s Ginetta G50 for a podium spot before the latter came to a halt on the final lap.

Cooper’s late demise gifted Nathan Antunes the final spot on the podium following an impressive charge from the Audi R8 driver, who almost went a lap down after his compulsory pit stop.

Antunes had led the race from Saturday winner Ryan Millier in the Jamec Pem Audi R8 and the Trass Family Motorsport Ferrari 458 of Graeme Smyth.

The trio dominated the race maintaining their positions through two Safety Car periods caused by separate crashes at Turn 3 for the McLarens of Tony Quinn and Tony Walls.

A decision to pit on the final lap of the second Safety Car period saw the three cars narrowly avoid going a lap down as the race resumed on lap 12.

The #74 Jamec Pem Audi followed in the wheel tracks of Antunes with Mies at the wheel, as the German managed to charge through to fourth at the flag.

Aaron Seton impressed in the second half of the race to guide the Scott Taylor Motorsport Porsche to fifth ahead of James Koundouris and Mark Griffith, who had been fighting for a podium spot in the final stages.

Jono Lester was unable to match his rivals Mies and Antunes following the pit stop, with the Kiwi only able to bring the Trass Ferrari home in 12th position.

The Australian GT Championship heads to Sandown for the penultimate round held from September 11-13.