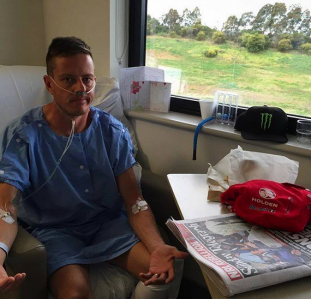 James Courtney says it is unlikely he will be fit enough to compete in the Wilson Security Sandown 500 as he continues his recovery from injuries sustained in a freak pitlane incident on Friday.

The Holden Racing Team driver was diagnosed with two fractured ribs and a punctured lung after being struck by pit equipment flung into the air by the downdraft of a Navy helicopter which was flying over pit lane.

“I would be back today if I was allowed but they said for the foreseeable future, not today obviously and probably not Sandown so I’m just trying to do everything I can to get ready as soon as I can,” he said.

Holden Racing Team boss Adrian Burgess said on Saturday that the team has already had discussions with key partners about potential replacements for Courtney ahead of Sandown on September 11-13.

Among the obvious candidates is US-based Australian Ryan Briscoe, who has extensive history with Walkinshaw Racing and Holden but missed out on a Pirtek Enduro Cup seat this year.

After being transferred from Westmead Hospital to a private facility today, Courtney recounted Friday’s accident that saw him struck down just prior to the day’s second practice session.

“I was just in the Supercheap Auto garage talking to Charlie (Schwerkolt) and as I walked into pit lane the helicopter was there,” he said.

There was dust and stuff so I put my arm up and I just got hit by something under my arm in my ribs.

“It knocked me into the alleyway between the two garages.

“I was on the ground I couldn’t breathe or talk to get anyone’s attention so I was just lying there hoping someone would see me. Thankfully the guys saw me and came over and started to be able to breathe again.

“There are two, three broken ribs where I got hit. Where it broke it fractured in and punctured the lining of my lungs.

“There is fluid and air leaking so it tries to deflate my lungs so that is why it is hard breathing and then it is just time for the lung to repair. I think it is going to be a while.”