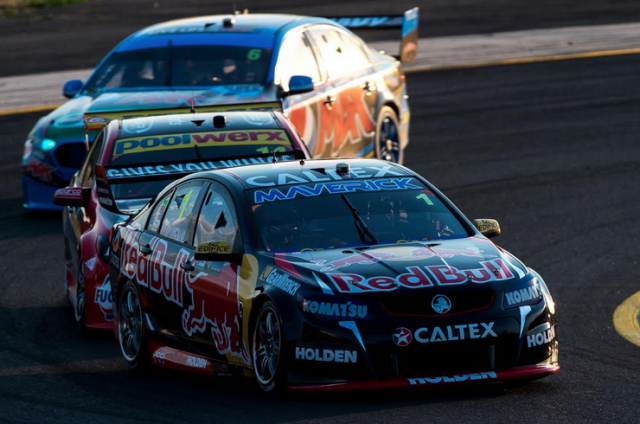 Jamie Whincup held off Fabian Coulthard to take a drought breaking victory in Race 22 of the V8 Supercars Championship at Sydney Motorsport Park.

The win is Whincup’s first since Race 6 of the season at Symmons Plains back in March.

Starting on the outside of the front-row, the Red Bull Holden driver made the best of the starts to take the lead at Turn 1.

Fabian Coulthard also slipped by pole-sitter Chaz Mostert on the run to Turn 1 before applying heavy pressure to Whincup for the entire 16 laps.

Whincup survived a sick sounding engine and a bad sportsmanship flag for exceeding track limits at Turn 5 on the way to a 0.6s victory.

“She sounded like a bit of a tractor, it was shocking, but obviously there was not much power loss,” said Whincup of the engine problem.

“Fabian is always good on soft tyres and it was a good battle and good to be on the top of the podium again.”

Prodrive’s qualifying speed failed to translate over a race distance with the soft tyre, with third placed Mostert taking the flag a further 4s behind Coulthard.

Scott McLaughlin pulled a mid-race move on Shane van Gisbergen for fourth, leaving the Kiwi to fend off a train of cars led by David Reynolds, Lee Holdsworth and Mark Winterbottom.

Winterbottom failed to make a single position from his eighth place starting spot in a disappointing run for the points leader.

Tenth for Craig Lowndes was meanwhile not enough to retain second in the points standings, dropping to third below Race 21 winner Mostert.

The opening lap had proven a wild affair, with multi-car incidents taking place at Turns 5 and 8.

Scott Pye was turned around by James Moffat as the field squeezed through the left-hander at 5, before Jason Bright endured contact with both Rick Kelly and Garth Tander on the exit of 8.

The first touch squeezed Kelly off to the left of the circuit, before rear-on contact from Tander spat Bright off to the right.

While all appeared to emerge unscathed, Bright would later spear straight ahead at Turn 1 with an apparent failure in the front-right of the Team BOC Holden.

Todd Kelly’s Nissan also took damage in the opening lap scramble, necessitating a trip to the garage for steering repairs.