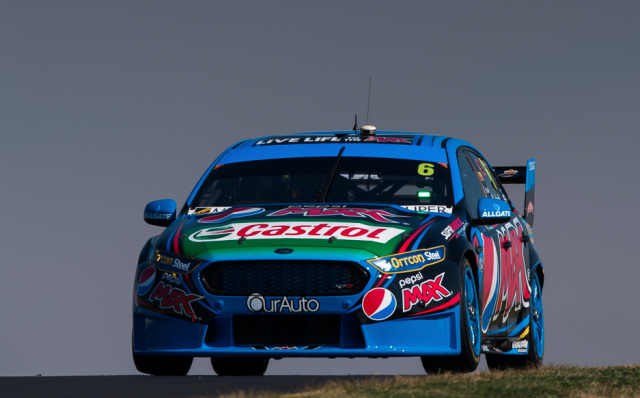 Chaz Mostert took another pair of poles at SMP

Chaz Mostert set a new qualifying lap record on the way to a pair of Armor All Pole Awards at Sydney Motorsport Park.

The Prodrive Ford proved the class of the field on both tyre compounds ahead of the afternoon’s pair of 60km sprint races.

It took until just 80 seconds remained for the first flying laps to be put down, with Jamie Whincup setting the first benchmark at 1:30.22s.

“It’s a big congratulations to the guys from Prodrive to give me such a good car over one lap this year, now we’ve just got to get it done off the start,” noted Mostert.

It was all Prodrive and Red Bull at the front with David Reynolds, Craig Lowndes and Andre Heimgartner filling fourth through sixth.

Jason Bright showed an impressive turn of speed to score seventh ahead of Rick Kelly, Scott McLaughlin and Scott Pye.

It was a tough run for the Holden Racing Team, with Jack Perkins 20th and Garth Tander last after an engine problem stopped him from going out on green tyres.

Tander’s car failed to fire as it was being pulled into the fast lane by his crew, aggravating a traffic jam that had already seen Kelly and Shane van Gisbergen make minor contact.

Kelly was aggrieved by Tekno’s move to pull the Kiwi’s Holden into pitlane in front of his Nissan.

“We keep bringing it up in the briefing and they neglect to do anything about it,” he said of the practice.

“As soon as they see us pull back and idle down pitlane, everyone pulls back regardless of who’s in the fast lane.

“It’s against the rules but it’s one of those things. Everyone wants to get their lap in at the same time. One day there will be a shunt with everyone doing that.”

On the higher wearing soft tyres, the second session again came down to single lap runs in the dying seconds before the chequered flag.

First car on the road Jamie Whincup again set the first benchmark, but his 1:29.09s effort would immediately be eclipsed by Mostert, whose 1:28.96s undercut the previous qualifying lap record.

On this occasion Whincup’s effort remained good enough for second, with Winterbottom unable to do better than eighth.

Fabian Coulthard and Shane van Gisbergen will share the second row, enjoying stark improvements from 12th and 21st in the opening encounter.

“It’s been a big turnaround,” admitted Coulthard. “We made a few adjustments to make it nicer. We are heading in the right direction, but it’s been a trying couple of days to get it to this point.”

David Reynolds, Scott McLaughlin and Lee Holdsworth filled fifth through seventh ahead of Winterbottom, Andre Heimgartner and Will Davison.

Garth Tander’s Holden returned to the track for the second session, ending up 16th, three places ahead of Perkins.

“It is not a good weekend for the team,” lamented Tander.

“Yesterday was really strange with what happened to JC (James Courtney) and we had a failure at the end of Practice 2 and then a failure again in Qualifying 1, where we didn’t get a lap.

“You don’t get a read on the car to change it for the soft tyre run, so the car was pretty bad. I will have to pass a lot of cars this afternoon. Hopefully it rains.”