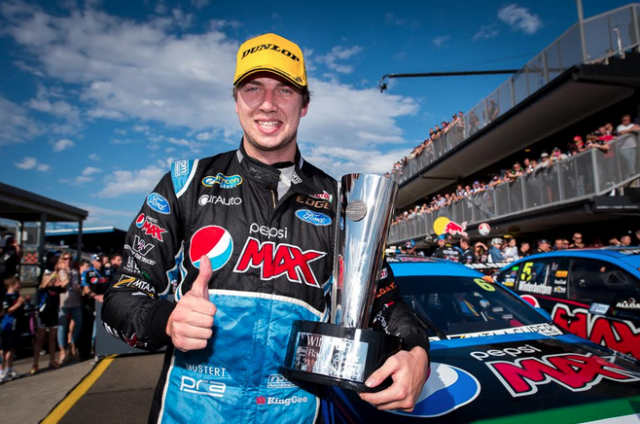 Chaz Mostert scored his fourth win of the season

Chaz Mostert out-gunned team-mate Mark Winterbottom from the front-row of the grid to take victory in the opening race at Sydney Motorsport Park.

Eager to make amends for a series of poor starts that have proven costly during the season to date, Mostert made what team principal Tim Edwards admitted appeared a ‘borderline’ getaway as he jumped with the lights.

Even so, the two Pepsi Max Falcons ran side-by-side through the Turn 1 sweeper before Mostert pulled ahead for good at the second corner. The youngster sprinted to an early two second lead before cruising home 1.6s ahead at the end of the 16 laps.

“It was good to get a good start and stay up the front,” said Mostert post-race.

“We’re consistent at the moment and we’re just trying to stay there.”

Although no official investigation took place, Winterbottom also noted that Mostert had been the first to go at the green.

“He went then he stopped at the start and then he went again,” Winterbottom recounted.

“There was not much in it but he had just a bit more pace. When you’re second you’ve still got to be happy.”

Third placed Jamie Whincup was a full 6.8s adrift of the win as Prodrive again proved to have the dominant package.

Whincup, however, was able to ease away from the third Prodrive entry of David Reynolds, who was left to fend off Craig Lowndes for fourth.

The result marked Whincup’s first podium since Race 8 of the season at Barbagallo in May. 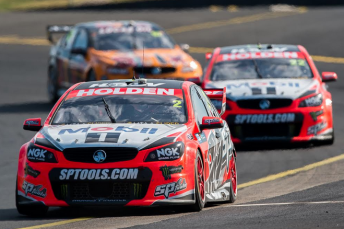 Tander and Perkins ran line astern in the HRT Commodores

While the first five finished as they started, Rick Kelly managed to jump two places off the line from eighth.

The Jack Daniel’s Nissan ultimately held off Andre Heimgartner’s Ford by 0.047s, forcing the Falcon towards the pitwall as they dashed for the flag.

Further back, Garth Tander charged from last to 18th on the opening lap, but could make no further progress.

Jack Perkins trailed his team-mate for the duration to finish 19th.

Contact between Nick Percat and Dale Wood at Turn 7 in the early stages that spun the latter’s Commodore will meanwhile be the subject of a post-race investigation.

Percat had dived down the inside of the BJR Holden, but found the door firmly closed as Wood turned in.

Faring even worse was Ash Walsh, who quickly dropped from 13th on the grid to last with a steering problem.

The day’s second sprint race will get underway at 1635 local time.