McLaren drop to rear of Spa grid after penalties

McLaren drop to rear of Spa grid after penalties 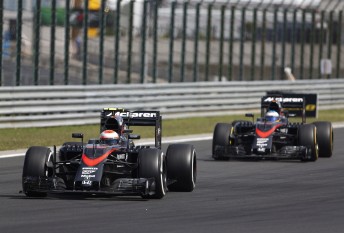 McLaren drivers Jenson Button and Fernando Alonso will start the Belgian Grand Prix from the rear of the field after the team was hit with a combined 55 place grid penalty.

The Woking squad has incurred the penalties after completing full engine changes on both its entries, which sees Button and Alonso utilising their seventh power units of the season.

In addition to the new power units both drivers will be fitted with new turbo chargers, MGU-H and MGU-K units, while Alonso will use a new Control Electronics component.

As a result, Alonso will receive a 30 place penalty while Button will undertake a 25 position drop, demoting the pair to the back of the grid for Sunday’s race.

Following a change to the regulations, untaken grid drops will no longer be converted to in-race time penalties.