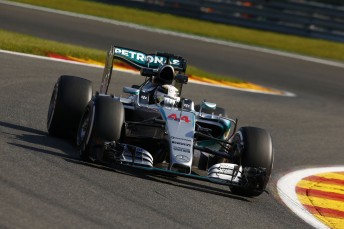 Lewis Hamilton scored his sixth consecutive pole position as he overshadowed his Mercedes team-mate Nico Rosberg in qualifying for the Belgian Grand Prix.

The Mercedes driver wasted little time in the session laying down a 1:47.449s effort from his first flying lap in Q3, which was 0.4s quicker than Rosberg’s opening salvo.

Hamilton went on to lower his personal best with a 1:47.197s to secure pole for Sunday’s race at Spa by 0.458s from Rosberg.

Romain Grosjean produced one of the surprises of the session emerging in fourth for Lotus, but the Frenchman will be demoted to ninth after being hit with a five place grid penalty for a gearbox change.

The sister Lotus of Pastor Maldonado will start from seventh alongside Sebastian Vettel, who struggled to extract pace from his Ferrari.

The session was one to forget for Kimi Raikkonen after a mechanical issue saw the Finn come to a halt in Q2, which brought out the red flags.

Manor drivers Will Stevens and Roberto Merhi will start from 15th and 16th respectively ahead of Max Verstappen, who incurred a 10 place grid drop for an engine change.

McLaren will form the final row of the grid after Jenson Button and Fernando Alonso were hit with hefty grid penalties for engine changes.

The Woking-based squad elected to introduce its eighth engine of the season, increasing the combined grid penalty to 105 places, following the decision to use a seventh engine in both cars during Friday practice.

Despite utilising a upgraded power unit, Button and Alonso struggled for pace with the former more than a second adrift of the cut of for Q2.

Prior to the session the FIA removed the new kerbs which had been installed at the top of the high speed Eau Rouge corner.

The ‘sausage’ kerbs were introduced to deter drivers from cutting the corner.

However a decision was taken for their removal following a request from drivers.