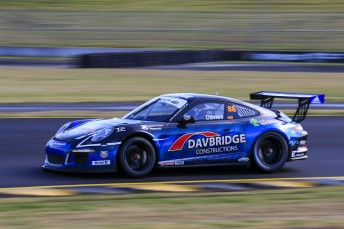 Shae Davies has smashed the qualifying lap record as he took pole position for the opening Carrera Cup race at Sydney Motorsport Park.

With the track still drying after overnight rain, the opening half of the 30-minute session saw drivers finding the limit both on and off the racing line.

With the track drying, the times tumbled and a range of drivers held the fastest time as the minutes wound down.

Davies, who is only running a part time schedule in the Carrera Cup due to a full time run in the V8 Dunlop Series, was on the pace throughout and he took the fastest time ahead of Nick Foster and Matt Campbell.

David Russell and defending champion and points leader Steve Richards rounded out the top five. In fact the top 10 all went under the lap record set two years ago by Alex Davison in the previous GT3 model. Last year’s corresponding qualifying session at Sydney Motorsport Park was run in wet conditions.

Points leader in the Tag Heuer Carrera Challenge, Shane Smollen, was quickest amongst the semi-pro racers.

On a busy day for the Carrera Cup the opening race will be run mid-morning with the second 19-lap race later in the afternoon.