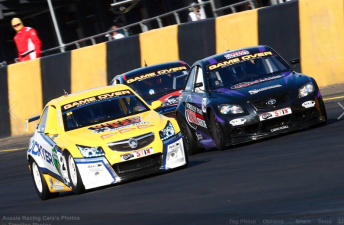 James Abela and Brendon Pingel have shared the opening two race wins in Round 4 of the Aussie Racing Cars Super Series.

Abela was an all-the-way victor in Race 1 before Pingel triumphed by less than a tenth of a second in a four-way battle for the Race 2 spoils.

Abela was left alone on the front row for the opener after pole-sitter Maurice Masini’s race ended before it started with a tailshaft failure on the warm up lap.

The local boy drove his Horsley Park Gun Shop entry away from the field on his home track, while Brendon Pingel recovered to finish second after being shuffled back on the opening lap.

Adam Uebergang finished 29th after a wild Turn 1 incident when he tangled with Denham Ballantine on Lap 3 and tipped onto his side before falling back to an upright position and continuing.

Abela also led the field away for Race 2 and despite looking set to again pull clear, he was soon reeled in by Pingel, Carr, and Flack.

All but Carr took turns at leading an action-packed race, Flack at one stage passing both Abela and Pingel at once as the pair bore down on Turn 1 in triple file

Pingel’s similar slingshot move with just a lap remaining proved decisive, however, as the championship leader ultimately hung on to take the chequered flag by less than a tenth of a second from Abela, Flack, and Carr.

Masini meanwhile impressed in hauling his way from rear of grid to sixth by race-end.