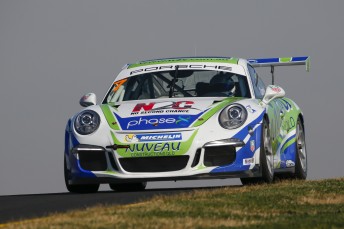 Matt Campbell has scored his first race win in the Carrera Cup series after a race which included time penalties to two of his rivals.

Campbell started on the front row after pole sitter Shae Davies was bumped back to third for a parc ferme infringement following qualifying.

Then at the start Nick Foster crept on the line and was given a 5-second time penalty.

Campbell had got the jump on Foster off the start, but with the knowledge of the time penalty, let his rival through on the eighth lap after coming under pressure.

Campbell was able to hold off a determined Davies in the final stages, who also got hit with a 5-second penalty for exceeding track limits.

So the final positions at the finish was Campbell from Foster, Steve Richards, Davies and Dave Russell.

Shane Smollen won the Tag Heuer Carrera Challenge class from Stephen Grove and Ash Samadi. Fast man from Friday Adrian Mastronardo made contact with Richard Muscat who appeared to stall at the start. Both cars failed to finish.

The second race of the weekend will be later this afternoon.