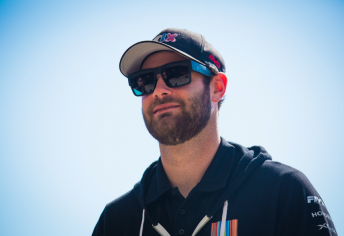 The driver has lamented rounds as ‘a bit frustrating’ while, without the latest updates from Triple Eight, the Tekno Holden has fallen from the front-running pace.

A relatively fresh set of soft tyres allowed the Kiwi to set the third fastest time in Practice 2 today in Sydney, which came after a wild opening session earlier in the day.

“Our car’s been a battle the last few rounds,” Van Gisbergen admitted.

“We’re trying a whole lot of things in a different direction to make it work so it’s been a bit of a struggle to be honest.

“Since we’ve been in this new car we had one good round at Darwin where the surface was different to everywhere we go, (but) back on a normal surface we’ve just really struggled. 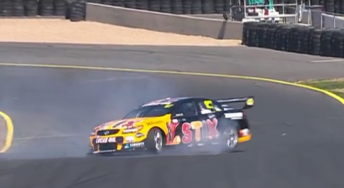 “It’s a bit frustrating but we’re working hard, trying so many different things, back in our own direction on set-up.

“In the morning session I was off the track more than I was on it, which was not fun.

“I think I’m alright at sliding a car but I probably spun out three times today.”

Van Gisbergen, who will join Red Bull next year, is resigned to the fact that Tekno cannot rely on the main team’s set-ups due to the technical specification of the cars drifting apart.

“We sort of tried to be closer to Triple Eight but the cars are just too different,” he continued.

“We’re still running the car as we were in 2013 and they’ve obviously gone another way so it doesn’t really work for us when we put their set-ups on.

“So we’ve gone back to our way and it’s not going to be good straight away but hopefully we get it back to what we want.”

Although Van Gisbergen is downplaying his chances for the weekend, predicted rain on Sunday could well see the Kiwi shine, as he did last year at the venue when the heavens opened.