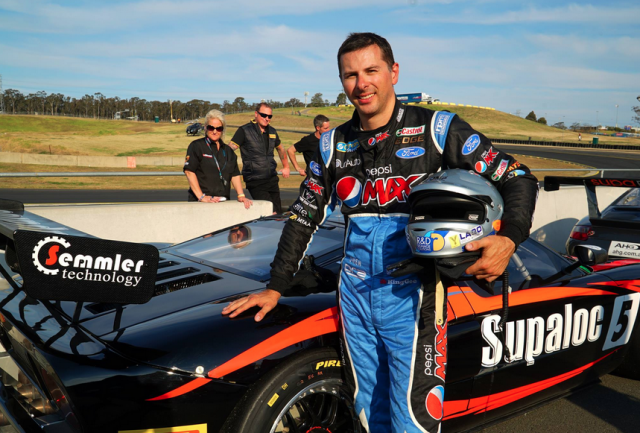 The Trophy Class entry was one of only two cars to lap in the 1:27s during the day after Michael Hovey set the pace in Qualifying 1.

The time was good enough to ensure that the Ginetta will share the front-row with the Supaloc Racing Ford in Race 1.

Owen needed only a handful of laps to clinch pole, gradually building up to the benchmark on just his third genuine flyer, before sitting out the latter part of the session which car #5 topped by nearly a second.

Hovey, driving with Matt Campbell, had earlier jumped from mid-pack to provisional pole just before the halfway mark of the morning session.

Christopher Mies and new co-driver Ryan Millier will head up the second row of the grid in their Audi R8 after the German spent much of Q1 stalking the top of the timesheets.

Sydneysider Nathan Antunes, who survived a wild moment during a multi-car incident in the opening session, will start on the outside of the second row.

Jono Lester/Graeme Smyth qualified fifth in the Trass Ferrari, while championship leader Tony Quinn was a distant 23rd aboard his McLaren.

Last-start winner Grant Denyer, who is driving solo this weekend with Tony D’Alberto set to return to Melbourne overnight for the imminent birth of his first child, will start Race 1 from 10th on the grid.

Denyer had found the tyre wall on his out lap in Q1, during which Jan Jinadasa and Danny Stutterd also had a nasty coming-together which has ruled the former out of the balance of the weekend.

The championship leader was one of many to set his best time in the morning’s opening 20-minute hit-out, lapping more than half a second quicker than next-best Zane Goddard.

Lloyd was then the only man to lap in the 1:31s in the afternoon session.

Fellow championship contender Thomas Randle was off the pace while bedding in brake pads during Practice 1 before placing second-fastest in Practice 2 to finish the day fifth overall, behind Goddard, Will Brown, and Tom Grech.

Maurice Masini claimed pole for Round 4 of the Aussie Racing Cars Super Series.

The 2013 series champion topped both qualifying and the day’s earlier practice session in his first of two meetings this season.