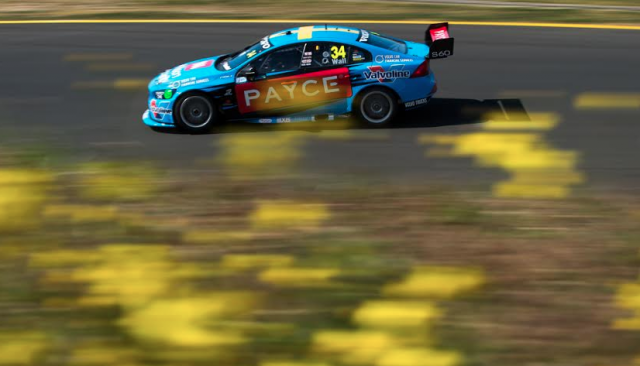 The Volvo moved 0.3s clear of previous fast man Jamie Whincup inside the final minutes, setting a 1:30.5s that would not be beaten.

Whincup had recorded his best time on the hard tyre almost 20 minutes earlier, which had in turn knocked off early pace-setter Scott McLaughlin.

Ash Walsh and Chaz Mostert improved in the closing stages to bump Scott McLaughlin to fifth.

Rick Kelly ended up sixth, ensuring all five manufacturers were represented in the top half dozen.

Scott Pye was the only other to join Wall in setting his best time on softs, moving to ninth in the closing stages.

“We put a soft tyre on at the end there and they were by no means great so I was quite surprised by the time actually,” said Wall post-session.

“The car was pretty good on the hard tyre too which is pleasing. We need to do a little bit more work on that but I’m happy with the balance.”

James Courtney and Shane van Gisbergen ended up 11th and 12th respectively, having sat out less than 10 minutes at the start of the session as their respective teams fixed issues from the co-driver hit-out.

While the mechanical problems were behind them, Van Gisbergen struggled with the handling of the Tekno Holden, enduring a series of wild offs.

“I was just testing the limits,” said Van Gisbergen.

“The car is pretty ugly as it has been the last couple of rounds… it is so hard to drive.

“When you brake it’s loose and in the corner it understeers, which seems to be a trait of the Holdens this year. We have just got to make it less pitch sensitive.

“It is two different cars into the corner and then through it. We are just trying to make it do one thing which we have been struggling with all year.”