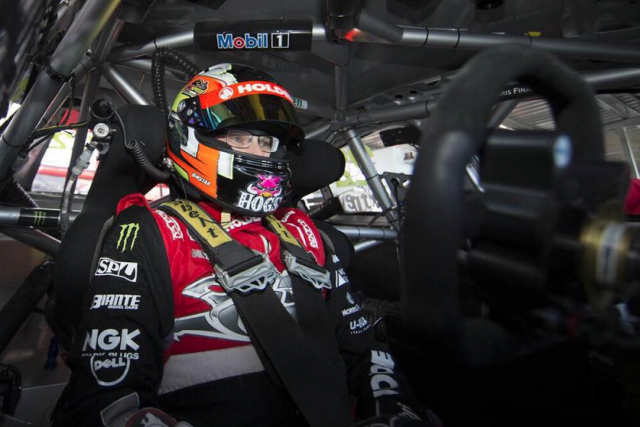 Jack Perkins is readying himself to replace the injured James Courtney for the remainder of the weekend at Sydney Motorsport Park.

Originally scheduled to complete only this morning’s co-driver practice session, Perkins subbed for Courtney in Practice 2 after the former champion was hospitalised as a result of a freak pitlane incident.

Force majeure rules allow Perkins to continue in the car for the weekend’s qualifying and three races, should Courtney be unable to take the wheel.

Walkinshaw Racing managing director Adrian Burgess told Speedcafe.com that the team is now waiting on further confirmation of Courtney’s condition from Westmead Hospital before enacting its ‘Plan B’.

Courtney was hit in the chest by pit equipment hurled into the air by the downdraft from the low flying helicopter.

CLICK HERE for Speedcafe.com’s earlier story on the incident and Courtney’s condition.

Perkins had ended Practice 2 in 20th place, just 0.3s shy of team-mate Garth Tander, after having his first run on soft tyres for the season during the 60 minute hit-out.

The 28-year-old Perkins said he had been unaware that Courtney had been injured until he was called up to take the wheel.

“I didn’t see anything that actually happened, I was in the truck and had just finished lunch,” Perkins told Speedcafe.com.

“I obviously wasn’t expecting to be driving at all in that session, but the boys told me to suit up and we continued with the program the best we could.

“When I came in a couple of times I was asking if James was coming back and it was hard because the boys were trying to focus on their jobs.

“I was probably more worried about James than anyone else because I was thinking he’d get back in the car, quantify the changes we’d made and move us forward.”

Although hopeful that Courtney can return, Perkins is now preparing to make his first solo start since last year’s Sydney 500.

“We’re probably a little bit behind the eight-ball if I’m to race, but we’ll do the best we can,” said Perkins.

“Hopefully James can do it. He’s still fifth in points and you obviously can’t drop your worst round.

“If I do drive then the only positive is that it gives me a lot more miles before the enduros.”

V8 Supercars has confirmed that it and the Australian Navy have launched an investigation into today’s incident.