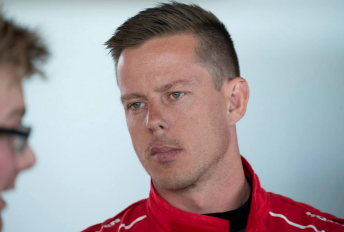 The Holden Racing Team has confirmed that James Courtney will sit out the remainder of the Sydney Motorsport Park event due to injuries sustained at the circuit this afternoon.

Courtney has two fractured ribs and a collapsed lung as a result of being hit by pit equipment flung into the air by a low flying helicopter.

According to a HRT statement, he will “remain in hospital for a couple of days to receive treatment”.

Jack Perkins substituted for Courtney during the subsequent practice session and will continue in the car as his replacement.

CLICK HERE for more from Perkins on replacing Courtney.

The news is a major setback in Courtney’s quest to take a second championship title this season.

The 35-year-old currently sits fifth in the standings, 371 points behind leader Mark Winterbottom.

It is the second time in two years that Courtney has had to miss an event due to injury, having been forced out of the 2013 Sydney 500 after fracturing his leg in a crash at the preceding event at Phillip Island.

Courtney has three weeks to recover from the latest injury before the Sandown 500.

“James Courtney has two fractured ribs and a pneumothorax which is small pocket of air between the ribs and lungs. It creates pressure on the lungs and make breathing difficult.

“Courtney will remain in hospital for a couple of days to receive treatment.