Foster fastest despite off in Carrera Cup

Foster fastest despite off in Carrera Cup 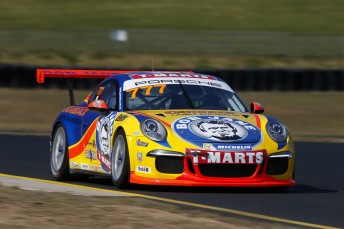 Nick Foster was the pace setter in Carrera Cup practice

Despite a high-speed lose, Nick Foster has continued his fast pace in the Carrera Cup, by setting the fastest times in both of today’s practice sessions at Sydney Motorsport Park.

Foster, who has won the past four straight races, was quickest from Matt Campbell and Shae Davies in both sessions. The first session was the quickest of the two 30 minutes practice periods.

Foster’s second session ended early, and even brought out the red flag after he went off the road at the high-speed Turn 1. He went spinning across the gravel before making light contact with the tyre barrier. 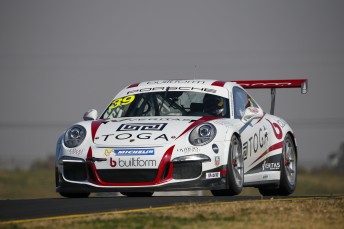 Adrian Mastronardo was quickest in the Tag Heuer Challenge

It was not the biggest incident for the Carrera Cup, with Tag Heuer Carrera Challenge contender Tony Bates making heaving contact with the inside wall after Turn 1 early in the opening practice. He went wide on the exit and the rear came around with Bates smashing into concrete travelling backwards.

He was shaken in the crash and his car has sustained enough damage for it to have been withdrawn from the weekend’s races.

Fastest in the Tag Heuer Carrera Challenge was Adrian Mastronardo thanks to his time in the first session.

Tomorrow the Carrera Cup will have qualifying in the morning followed by two 19 lap races mid-morning and afternoon.