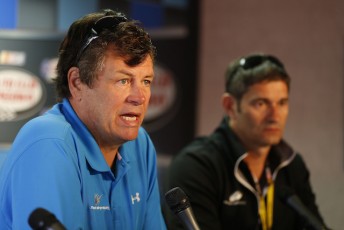 Michael Waltrip Racing has confirmed it will not mount a full-time challenge in the 2016 NASCAR Sprint Cup.

The confirmation sees Clint Bowyer and David Ragan seeking other drives next season and its large workforce also in limbo.

“Rob (Kauffman) joined MWR in 2007 and has helped give us the resources to build a competitive race team, and in 2012, Clint Bowyer took us to the doorstep of a championship,’ Michael Waltrip said.

“From where MWR started behind my house in Sherrill’s Ford to winning Sprint Cup races, poles and earning Chase berths, I am proud of what we accomplished.

“My family has been a part of NASCAR for almost five decades and I plan on being a part of it for years to come.

“I would not have had the opportunity to start this journey without so many great partners, sponsors and employees and I want to thank each of them for making Michael Waltrip Racing a reality.”

“It’s a sad day for MWR obviously. I love the culture we’ve built there.

“ You know, our sponsors, they’re not sponsors; they’re partners, and our employees are our teammates.

“We just have the perfect workplace, and unfortunately in 2016, we’re not going to be racing there.

“My hope is somebody wants to have a really nice shop full of really cool people that work together well and want to have a race team and we can provide that for them.”