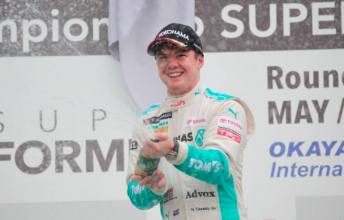 The 21-year-old will join the Italian squad as a replacement for Brandon Maisano for upcoming rounds at Portugal’s Algarve International circuit (September 5-6) and the Nurburgring (September 26-27).

Cassidy has enjoyed a resurgence this season competing in the Japanese F3 Championship, with the former Toyota Racing Series champion leading the standings with just four races remaining.

The Auckland driver has made sporadic appearances in the European F3 Championship with his last arriving in the final two rounds at Imola and Hockenheim last year.

“Firstly I would like to thank Prema Powerteam for this opportunity, one that I am really looking forward to,” said Cassidy.

“With their knowledge I am looking to learn as much as possible, to develop myself, with the aim of good results in these two race meetings.

“I am sure there will be a few little differences to racing in Japan, but I feel prepared, and am looking forward to the challenge.”

Cassidy will contest the penultimate round of the Japanese F3 Championship at the Twin Ring Motegi circuit this weekend before departing for Europe.