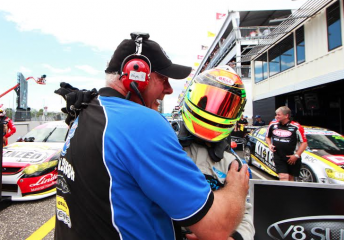 SPEEDCAFE: Wayne, it was only just over a week ago that Aaren missed out on the co-drive at Lucas Dumbrell Motorsport. How long had the wildcard option been simmering away in the background?

WAYNE RUSSELL: Plus Fitness (primary sponsor of the team’s Dunlop Series entry) were the ones that got the ball rolling initially.

They’d known we were always keen to do it (a Bathurst wildcard), so about seven weeks ago they just came to us and said ‘what would it take to do it’?

So it was all bubbling away and we were actually going to push the button on it six weeks ago but then the LDM thing raised its head.

Plus Fitness were fantastic through that. They said ‘that should be your first priority’. Once that option had gone away, we pressed the button on this.

SPEEDCAFE: I know it’s been frustrating for you guys having Drew and now Aaren missing out on co-drives with main series teams. Did it lessen the blow this time, knowing this was the alternative?

RUSSELL: It did. The preferred option was to run with another team because that would mean Aaren could do all three races (in the Pirtek Enduro Cup).

But I’m looking at it now as a blessing. We’re doing our own gig, the whole of Newcastle is starting to get behind us already and both the boys are able to race. It’s really exciting.

SPEEDCAFE: These things aren’t cheap to run. Can you tell us what sort of investment is going into it?

RUSSELL: With the deal we’ve done with Garry, via Dragon Motor Sport (which owns the car), for GRM to prepare the car, the total budget is around $150,000.

We’re doing it ourselves at the track. We’ve got a team that’s super excited, because it’s a great opportunity for all of our guys. 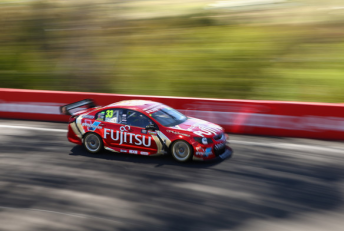 The GRM Holden that the Russells will race, pictured at Bathurst in 2013

SPEEDCAFE: Will there be any involvement from GRM at the race meeting itself?

RUSSELL: Not a lot. At the end of the day they’ve got their own deal and it’s the biggest race of the year, we can’t be a burden on any team.

They’ve offered some engineering help and support, it won’t be ‘go away and leave us alone’, but we’ve got to be realistic about how we do it. We’ve got a good bunch of people. We should be ok.

SPEEDCAFE: Are you going to be able to have any test days with the car to get to grips with it before Bathurst?

RUSSELL: We’ll probably only get one at Winton (GRM’s test track), two Mondays before Sandown.

The boys will go down for seat fittings before we go to make sure all of that side of it is taken care of.

Garry’s boys have been great to deal with so far, really awesome. I can’t speak highly enough of them.

SPEEDCAFE: Can the car and the engine package be competitive? It obviously hasn’t raced since the end of 2013.

RUSSELL: We’re realistic. It’s about going to the mountain with the thought of keeping it off the walls and just doing as many laps as we possibly can.

The engine (Walkinshaw customer unit, as previously raced by GRM) is pretty much where every other engine is in the field nowadays.

We expect to run with the field, but you’ve got to remember how competitive it is.

I believe it’s the best touring car field in the world. We’ve got to be realistic about what we’re doing.

SPEEDCAFE: It’s going to be a massive weekend for you, because your team is also planning to run the Dunlop Series car.

RUSSELL: Running that is about giving Drew more laps, to be honest. 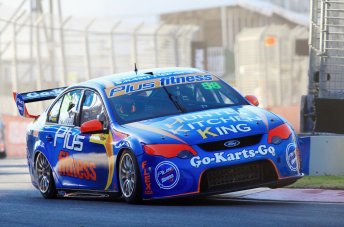 It’s not that the car will take a back burner, we’ll have three or four people dedicated to that car who will then come across a little bit into the main game as well.

The whole crew will be about 15 to 16, which is double what we’d normally take.

SPEEDCAFE: Is the bigger picture here about giving a kick-start to Aaren’s main game career? He’s had podiums in the Dunlop Series, but it’s so hard to make that next leap.

RUSSELL: That’s predominately why we’re doing it, to give him a kick-start.

Everyone you talk to about co-drives, even back in the day for Drew, they say that if you’d done a Bathurst and had runs on the board, we’d take you.

Without already having the experience, there was no way in.

The opportunity for us to do it as a family is so appealing as well. It’s something special.

SPEEDCAFE: You’re doing this wildcard ahead of a major watershed in the Dunlop Series with the COTF coming in next year. Is the future up in the air for you beyond 2015?

RUSSELL: Absolutely. We’ll just have to stop and look at the whole thing and assess where we’re at. We won’t be making any plans until we get this race done and see how we go.