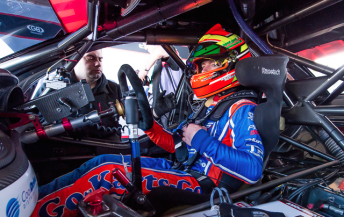 Aaren Russell tested with LDM at QR, but again missed out on a full Enduro Cup berth

Years of seeing his sons turned away from V8 Supercars co-drives due to a lack of experience proved the driving force behind Wayne Russell’s move to enter a Bathurst wildcard this year.

As announced on Tuesday, the Russell’s family-run Novocastrian Motorsport will field brothers Aaren and Drew in a Garry Rogers Motorsport Holden for the Great Race.

The move comes eight years after the Russells joined the V8 Supercars Development Series with a then 19-year-old Drew at the wheel of an ex-Derek van Zelm Commodore.

Aaren ran alongside his older brother in a two-car Development Series team from 2010, before Drew stepped back from full-time driving at the end of 2013.

The Newcastle-based team forged links with a number of V8 Supercars Championship outfits over the intervening years as it continually upgraded its equipment.

The deals included occasional tests in main series cars and even a ‘reserve driver’ tag for Drew at Stone Brothers Racing in 2012, but never an endurance gig.

Last year saw Wayne, a Bathurst starter himself aboard his own privately run Holdens in the 1990s, unsuccessfully push to enter the team’s Dunlop Series-specification Ford car in the 1000.

Aaren suffered his latest setback little more than a week ago when he missed out on the remaining co-driver slot alongside Tim Blanchard at Lucas Dumbrell Motorsport. 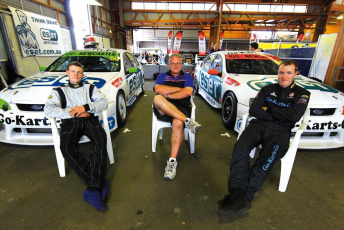 From left: Aaren, Wayne and Drew with their ex-BJR Development Series Fords in 2010

That’s when the button was pressed on Russell’s back-up plan; the GRM-assisted wildcard.

Novocastrian had begun piecing together the entry two months ago when sponsor Plus Fitness, knowing Russell’s desire to see his boys race at Bathurst, raised the prospect of backing the venture.

Russell admits that not all of the estimated $150,000 cost of the exercise will be covered by the sponsor, but says biting the bullet was necessary in order to get Aaren on the map.

“Predominately why we’re doing it is to give him (Aaren) a kick-start into the main series,” Russell told Speedcafe.com.

“Everyone you talk to about co-drives, even back in the day for Drew, they say that if you’d done a Bathurst and had runs on the board, we’d take you.

“Without already having the experience, there was no way in.”

The two brothers grew up around motorsport thanks to their father’s racing and the chain of go-kart centres that the family runs in their native Newcastle.

While the now 27-year-old Drew, with wife and child, has clear priorities outside of motorsport, Aaren remains very much dedicated to the dream of becoming a full-time V8 Supercars driver.

The morning after yesterday’s announcement of the wildcard in Sydney, Aaren is back in Queensland, readying his Dunlop Series car for the 250km Bathurst support race.

Wayne Russell says that it’s Aaren’s work ethic and determination to succeed that has kept the family team pushing ahead, just as much as its faith in the youngster’s ability behind the wheel. 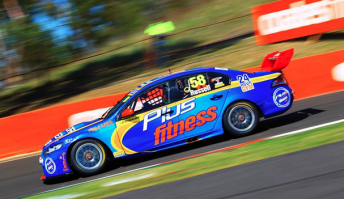 The 23-year-old’s stocks lifted almost exactly 12 months ago when he scored a breakthrough Dunlop Series podium at Ipswich.

The result kicked off a string of three podiums in four rounds and came directly after preparation of the team’s Ford moved from its base in Newcastle to Paul Morris’ Gold Coast workshop.

Although the engineering support through PMM has undoubtedly helped, Russell stresses that budget constraints see Aaren carry out the vast majority of the work on the car himself.

“The desire, the drive, the work ethic. It’s second to none,” said Russell of his son.

“He’ll come back from working at Paul’s and do a 12 hour shift at the go-kart centre to make up for extra staff hours we need while he’s away.

“He doesn’t draw a wage from the go-kart centre, it all goes straight into his racing. He absolutely works his butt off.

“I don’t know any other driver in the Dunlop Series that works on the car, prepares it himself on his own. He does it all.”

The team will run the Ford and the Holden at Bathurst, with the Dunlop Series race providing Drew with critical mileage ahead of the 1000.

Russell expects to double his normal travelling crew to 16 for the weekend, where the goal will be to “stay out of trouble and on the lead lap for as long as we can”.

CLICK HERE for more with Wayne Russell about the Bathurst wildcard in our Cafe Chat.