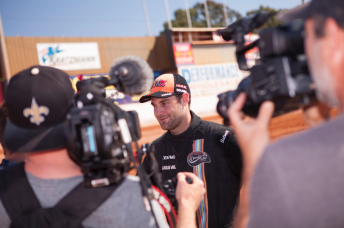 Van Gisbergen, who grew up racing speedway and briefly tested an older Sprintcar in Perth earlier this year, admitted to being apprehensive early in Scheuerle’s new car.

“I was a bit intimidated initially,” said the Kiwi.

“It’s tight in the cockpit, the walls are close and Sprintcars have so much power, but I got more and more comfortable and the speed came with it,”

“When you sit in it, it doesn’t feel comfortable because you’re so upright and driving it like a bus, but when you get going the rush takes over. The power these cars have is just awesome.”