Dunlop Series driver Aaren Russell will team with brother Drew in a wildcard entry for this year’s Supercheap Auto Bathurst 1000.

The first of two wildcards expected for October’s Great Race, the duo will utilise a Garry Rogers Motorsport Holden for their Bathurst 1000 debuts.

GRM will prepare the car from its Melbourne workshop before the Russell’s own Novocastrian Motorsport crew looks after it on the mountain.

The entry has been lodged in the wake of Aaren Russell missing out on a co-drive in the Pirtek Enduro Cup with Lucas Dumbrell Motorsport, with which he recently cut practice laps at Ipswich.

The Russell Commodore will enjoy major sponsorship from Plus Fitness and wear the #62, which was sported by father Wayne Russell during his three Bathurst starts during the 1990s. 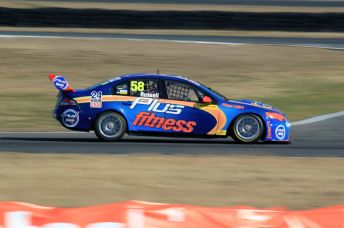 Along with the Davisons and Kellys, the Russell entry ensures that there will be three pairs of brothers on the Bathurst grid for the first time since 1984.

Aaren Russell is currently in his sixth Dunlop Series season, sitting 11th in points after five of seven rounds.

“This is the sort of thing I’ve been working to achieve for many years and to do with it with my family and our own team makes it even more special,” said the 23-year-old.

“Motorsport is our passion, it’s something we go ‘all in’ on and the sacrifices we’ve all made show just how committed we are to it.

“To be heading to Bathurst to compete in the most famous race in Australian sport is very special and not something I am taking lightly. The Holden that the Russells will race, pictured at GRM earlier this year

“We have huge respect for all of the V8 Supercars Championship teams competing at Bathurst.

“We’d like to simply stay out of trouble, fly the flag, complete the race and be happy with our day’s work.”

Drew Russell, 27, competed in the Dunlop Series from 2007 to 2013, before stepping back so that the family-run team could concentrate on his brother’s career.

Although short on recent race mileage, Drew’s preparation will be bolstered by also running in the Bathurst’s 250km Dunlop Series race as a co-driver of Aaren’s regular Ford mount.

“We’re under no illusions as to our place in the pecking order when we head onto the track at Mount Panorama, we’re not contending to win the race but we absolutely will be putting our front foot forward to give a positive and professional account of ourselves,” said Drew.

“I haven’t been driving much of late, so running the Dunlop Series car up there is geared around me doing most of the driving in it to help get me ready for the main race on Sunday.”