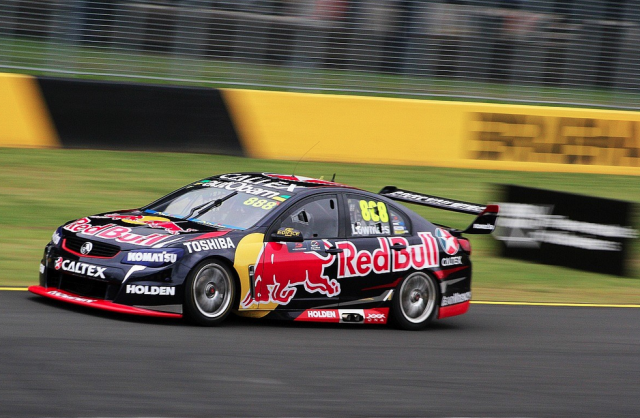 Craig Lowndes is optimistic that Prodrive’s winning streak can be broken this weekend at Sydney Motorsport Park, despite the red hot form of the FG X Falcons.

The flowing SMP layout is one of the most aerodynamic dependent on the calendar and is again expected to suit the new-for-2015 Fords.

Mostert topped the official pre-season test at the venue in February, giving an early taste of the potency of the Ford package.

Lowndes and Red Bull however head to Sydney buoyed by improved form last time out at Queensland Raceway.

Ipswich saw Lowndes finish on the podium in all three races, splitting Winterbottom and Mostert in second place on two occasions.

The veteran also took a surprise pole position on Saturday, making the most of Red Bull’s relative strength on the soft tyres.

“I think it’s certainly possible to beat them (Prodrive) there,” Lowndes told Speedcafe.com of the Sydney event.

“Their speed isn’t all just aero, they’re doing a good job overall and for us it’s about getting our own ducks in a row.

“There’s no doubt we’ve closed the gap. We ran with them at QR and I’m fully expecting we can do it again at Sydney Motorsport Park.

“It’s a circuit I really enjoy. It’s a fast, flowing track and hopefully it’ll suit us. We’ve had great results there in the past and I enjoy it as a layout.”

Lowndes stresses an urgency to get on terms with the speed of the Prodrive Fords, given that Winterbottom’s championship lead has ballooned to 256 points.

The three-time champion is hopeful that team-mate Jamie Whincup and Shane van Gisbergen in Tekno’s Red Bull customer entry can also step up and take points from Winterbottom later this year.

Prodrive’s speed has allowed Mostert and Reynolds to recover from slow starts to the season to sit third and fourth in points respectively.

“Even if we do beat Prodrive, they’re going to be second and third,” said Lowndes of the title picture.

“We need other cars in between ourselves and them.

“Jamie has improved, there’s no doubt about that. He’s got confidence back but his performance is probably still lacking a little bit.

“There’s no doubt that he’ll have a moment where he’ll just bounce back. He’s a class act and Dutto (engineer and team manager Mark Dutton) and the team are right behind him.

“There’s them, obviously we need Gizzy (Van Gisbergen) up and firing. We need a lot of guys up and firing to have an impact on that points gap.”