Decorated Tasmanian driver Greg Crick has announced his immediate retirement from racing, citing health reasons for his decision after a 40-plus year career.

The veteran had combined with German Christopher Mies to win the Phillip Island 101 Australian GT endurance race in May.

Crick was also entrenched in the Touring Car Masters, running a 1970s Chrysler Charger in the class alongside his Australian GT Championship duties aboard the Audi R8.

“I had planned to race until I was 80 but with five grandkids and a lot of life still to live, I decided that I didn’t need nor want to risk it anymore,” Crick said.

“The hit in the second race at Queensland Raceway (where Crick was an innocent party in a hefty turn three accident in the second TCM race of the series’ most recent round) was probably a notice that it was time to hang it up.

“There are some ongoing medical and health side-effects from the Bathurst drama (hospitalised after suffering carbon monoxide poisoning in the 2014 Bathurst 12 Hour) that we are still working on and every time you have a hit in a car, there’s a chance that it will set back the recovery. “I’ve been going at this since I was 17, so I’d say 43 years isn’t a bad effort. I’ve had some success but perhaps most importantly I’ve made plenty of great friends along the way.”

Among a list of career highlights are victories in the 1992 and 1993 Targa Tasmania, driving a Honda NSX, the 1991 Australian Sports Sedan Championship and the 2006 Australian GT Championship.

Crick was also a leading privateer in the Australian Touring Car Championship and Bathurst 1000 and had a third place finish in the 2002 V8 Supercars Development Series.

In the 2014 Bathurst 12 Hour, Crick drove an Erebus Mercedes SLS, engaging in a tense battle with ex-F1 driver Mika Salo late in the race which helped the Benz team to a podium finish.

“The support I have had from the motorsport community both in the immediate aftermath of the 12 Hour thing and in the years since has been remarkable and I wanted to acknowledge that,” Crick said. 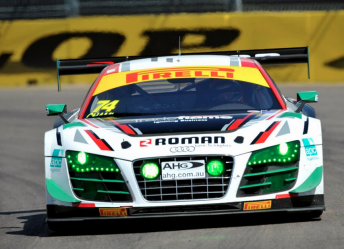 Crick aboard the AGTC Audi in Townsville

“Everyone rallied around me, both my mates and people I’d never met, and the care and the support from the community was and is greatly appreciated.

“It was nice to come back and get a win in the Charger at Bathurst and win at Phillip Island this year with Chris in the Audi. They were great moments and it was nice to have some success before hanging up the helmet.

“It’s been a fantastic journey with a lot of great people and the good times will stick with me forever.

“I didn’t want to say anything or make a fuss about stepping away but I needed to be able to thank everyone who’s supported me throughout the last two years, in particular, but for my whole time in the sport.

“I’ll still be around and will hopefully still enjoy watching mates race from the other side of the fence every now and then.”