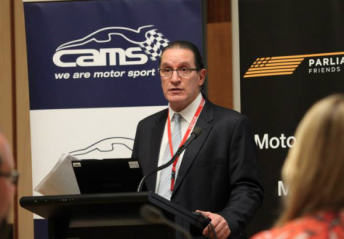 The Confederation of Australian Motor Sport (CAMS) refuses to alter its stance on a recent national motorsport review despite calls from state councils to rethink its decision.

As a result of the shake up, CAMS State Councils in Queensland and Victoria have responded by passing motions at recent meetings for the AMRC review to be scrapped and for the categories affected to resume their national status.

It is understood the same motion will also be tabled at the next meeting of the New South Wales State Council in October.

“The AMRC recommendations were unanimously approved by our board,” Arocca told Speedcafe.com.

“The review is a national issue, not a state issue; therefore approval of state councils is not required.

“So while it is disappointing that the Councils have passed these motions, which were proposed by a handful of private businesses and not supported by any research or data, we won’t be distracted from our role.

“We will do what is best for the sport as a whole and continue to drive the growth that we have been able to achieve in recent years.”

Queensland state chairman David Paterson stressed that one of the gripes among CAMS members is a perceived lack of consultation prior to the results of the strategic review.

The Queensland State Council has asked for the publication of the results from a recent CAMS survey prior to the review announcement, but this request is understood to have been declined by CAMS.

“CAMS has come back to us saying they will not be revoking it (the review) and their position remains unchanged so really that’s the end of it,” Paterson told Speedcafe.com.

“We have made it clear what we believe and why we believe it but the board haven’t moved. But having said that I believe some other state councils our heading down the same path.

“If all the state councils are of the same opinion. Maybe we will or we won’t see a change from the board.

“All we wanted them (CAMS) to do was to reconsider and at this stage it doesn’t appear that they are going to.

“A popular feeling is there has been a lack of consultation we were advised that CAMS conducted a survey recently and that was the consultation.”

In response, Arocca says CAMS received recommendations from category managers as well as conducting “a survey of the broader membership” before determining its future vision.

Meanwhile, the Victorian State Council is still awaiting a response from CAMS following its move to follow Queensland at its recent meeting held on August 4.

Keen to work with CAMS to help progress the sport, chairman Paul Zsidy says the aim of the motion is to open up dialogue following the review announcement.

“We hope that we don’t get a quick response because obviously it is something we hope that will be considered and discussed and we will get a considered response,” said Zsidy, who competes in the Australian Formula Ford Series.

“We hope to achieve some more dialogue as I don’t think we can achieve anything if we all start throwing rocks at each other.

“We are all meant to be working together for the benefit of the sport. The sport and CAMS does better if more people are buying licenses, paying entry fees and purchases permits to run events.

“The feeling of the membership is the review as it stands at the moment is perhaps somewhat restrictive to a number of CAMS members who aspire to take their race vehicles from speed events through to racing at the national level.”