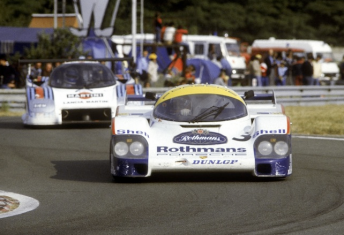 After being expected to sell for between $7-9 million, the 956 went under the hammer for a staggering $10.1 million

The 1983 Le Mans-winning Porsche 956 co-driven by South Australia’s Vern Schuppan has fetched a record price at auction in the United States.

Going under the hammer at the Gooding & Company’s Pebble Beach auction in California, the 956 smashed sales expectations in a $US10.1 million ($13.7 million AUD) transaction.

The sale of Lot 50 surpassed the previous record for a Porsche at auction, which was set three years ago at Pebble Beach with the $US5.83 million price for a 1972 917/10 Can-Am car.

Schuppan helped guide the 956, chassis number 003, to victory in the 1983 Le Mans 24 Hour alongside Hurley Haywood and Al Holbert.

The Australian had also driven the car at Le Mans the previous year, teaming with Jochen Mass for a second placed finish.

Schuppan purchased the car from Porsche once it was retired from racing duties, before selling it during the 1990s, after which it passed through the hands of multiple private owners. Porsche extended its outright winning record at Le Mans this year with an 17th triumph in the 919 Hybrid at the hands of Kiwi Earl Bamber, Nico Hulkenberg and Nick Tandy.

The Berlinetta Speciale was a one-off road car from Italian coach building firm Carrozzeria Bertone, based on a 250 GT.

The 65th staging of the Pebble Beach Concours D’Elegance features car shows, rallies and auctions along with historic racing at nearby Laguna Seca.