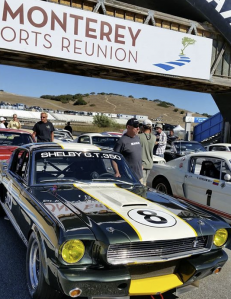 Against a field of Shelbys from 1965-1970, Lawlor won the Saturday morning race at the famous northern Californian event, which embraces a full range of historic competition cars dating back to early last century.

“I would have been happy to finish top ten,” Lawlor said before taking the Saturday morning race win after landing pole.

He managed to finished second in the afternoon race, hampered by overheating and tyre problems.

Of monstering the Shelby through the Corkscrew Lawlor said: “I still think across the top at Bathurst is better – the corkscrew here is two corners. On the mountain you have to get them all right.”

The Shelby races attracted a field of 40 examples in a tribute to the 50th anniversary of the celebrated Shelby GT350.

Lawlor is a regular on the Australian Heritage Touring Car scene having campaigned an ex-Colin Bond Caltex Ford Sierra before switching to the GIO Nissan GT-R.

The Shelby was built by Chad Parrish’s acclaimed Exclusive Body Werks in Sydney. Estonian Ralf Aron has claimed a maiden win in the final heat of the ADAC Formula 4 Championship at the Nurburgring.

“Driving in these conditions was tricky, but visibility was good at all times, and the battles were immense fun,” said Aron.

Australia’s Joseph Mawson encountered a challenging weekend behind the wheel of his Van Amersfoort Racing machine.

Mawson finished the tri-race meeting with a pair of eighths and a seventh in the final 17-lap race.

“From the outset of the weekend we struggled to find the perfect set-up and this hurt us during qualifying,” said Mawson.

“After starting outside the top ten in the first two races it was good to get back inside the points and show some good race pace in the dry.

“We still need to find some more before the next round and everyone in the team is working hard to improve our pace.

“Race three was a difficult one because the track conditions were so different to what we had experienced in the previous days.

“In the end we finished with three results inside the points and are still within reach of the championship lead.”