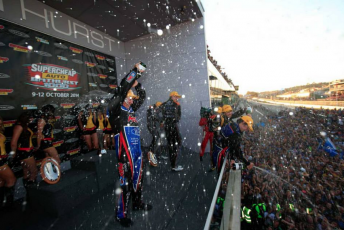 With the Pirtek Enduro Cup less than a month away, we want to know who you think is the best co-driver among the 2015 field.

While two further wildcards are expected to join the fray at Bathurst, all co-drivers for the 25 entries that will contest the full Enduro Cup have now been confirmed.

Remarkably, 17 pairings continue from last year, including the Andre Heimgartner and Ant Pedersen combination, which was previously a Bathurst-only entry.

Those out of a co-drive this season are reigning Bathurst winner Paul Morris and fellow veterans Greg Murphy, Greg Ritter, Steven Johnson and Craig Baird.

Former co-drivers Ash Walsh and Tim Blanchard are meanwhile full-timers this time around, while Jack Perkins moves in the opposite direction, taking up part-time duties with the Holden Racing Team.

Karl Reindler meanwhile returns after a one-year sabbatical, linking up with Blanchard at Lucas Dumbrell Motorsport.

The bulk of the co-drivers will again be in action at Sydney Motorsport Park this Friday for the opening 30 minute practice hit-out.

Who do you think is the best co-driver in the 2015 Pirtek Enduro Cup? Cast your vote below.