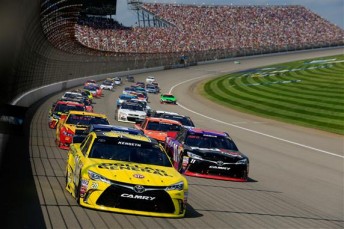 Kenseth dominated from pole at Michigan

Matt Kenseth has scored a dominant victory at the Pure Michigan 400 as the Joe Gibbs Racing domination continues.

It was his 34th career win, third of the season, third at Michigan and sixth for the team in the last eight races.

The win also came with NASCAR’s high-downforce aerodynamic package, meaning the JGR cars have been either victorious or certainly competitive no matter what track or technical package they have had to run.

All up Kenseth led 146 of the 200 laps as he did more than enough to hold off the challenges from the likes of defending champion and points leader Kevin Harvick (second) and an impressive Austin Dillon (fourth).

In Victory Lane Kenseth said that the Gibbs organisation was not getting ahead of themselves as the season heads towards the Chase for the Sprint Cup.

“It’s early to talk favouritism as there’s 16 teams that can win on any weekend,” said Kenseth.

“It’s one week at a time, but this has been a great week for the guys involved on our car. It has been a great couple of months for the whole organisation and we definitely have some momentum built.

“The guys gave us a rocket today, and really have done that the last couple of months. We just got to work hard to keep it rolling.”

As good as it was for the Gibbs team, the same couldn’t be said for the Hendrick Motorsports cars with Jimmie Johnson in particular continuing a tough run of late finishing 39th. His day included a single car spin across the grass which caused heavy damage to the front splitter.

Clint Bowyer’s hopes of making the Chase took a hit after contact with Ryan Newman. Bowyer scraped the outside wall on the backstretch before sliding to the inside retaining wall. He returned to the track at a reduced pace more than 30 laps in arrears at the finish.