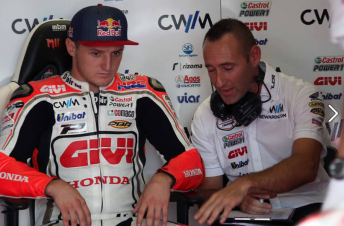 Jack Miller says he is unfazed by the uncertainty surrounding his plans for a second season in MotoGP’s premier class.

The 20-year-old Australian made the leap from Moto3 to the premier class this year under a three-year contract with Honda.

Honda placed the rising star on an Open class machine at satellite team LCR Honda, however ongoing speculation suggests the Italian outfit will downsize to one bike for next season.

Such a move would likely see the squad retain primary rider Cal Crutchlow, leaving Miller without a ride.

Despite the uncertainty, Miller, who is third in the Open class standings, is confident he will feature aboard a Honda next season.

“I don’t know where I will be next year but it will be a Honda that I am riding, whether it is a factory or an Open bike I don’t know,” Miller told the official Australian Grand Prix podcast.

“I’m not too fazed, I am happy to be in the position that we are in and I hope we can get some decent results.

“I still think I’ve got a lot to learn before I step up to the factory bike.”

Halfway through his maiden campaign in the premier class, Miller has described adjusting to life in motorcycle racing’s top tier as a ‘rollercoaster’.

The Queenslander has struggled for consistency since stepping up to the premier class, recording four points finishes while suffering five retirements from the 11 rounds this year.

Amid the challenges, the Townsville rider, who finished runner-up in Moto3, believes he has matured as a rider.

“It has been a bit of a rollercoaster we have had some good results and some terrible ones,” added Miller, who finished 19th in Sunday’s Czech Republic Grand Prix.

“We have definitely learnt a lot that is for sure and I feel like I have matured as a rider, but we have still got a lot more learning to do in the second half of the year.

“It has taken a lot of mental strength as we had been coming off an awesome season last year where we have been winning races and being on the podium consistently.

“We knew what we were getting into and I’m not a stranger to being not up there, so its is back to square one.

“Each race we seem to be getting quicker and quicker so hopefully that continues.”

Miller heads to Silverstone for the British Grand Prix held from August 28-30.