This year’s Bathurst field is expected to feature 27 cars

An all-female entry is one of two wildcards expected to be fielded in this year’s Supercheap Auto Bathurst 1000.

Although details remain scarce, ongoing speculation that an all-female driver line-up is being assembled has intensified ahead of the event’s official launch on Wednesday.

Dunlop Series driver Renee Gracie is the only woman currently competing in either tier of V8 Supercars and is an almost certain starter for any such entry.

It is understood that a co-driver for Gracie has been sought from overseas in what would prove a major publicity boost for the race.

While Danica Patrick has conflicting NASCAR duties in the United States, those available include part-time IndyCar drivers Simona de Silvestro and Pippa Mann. 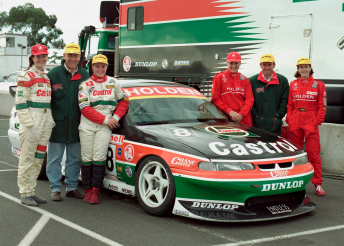 The Castrol Cougars program ran at Bathurst in 1997 and 1998. pic: Castrol Racing Australia

A woman has not competed in the Great Race since Leanne Tander in 2009, while the last all-female entry came in 1998, driven by Melinda Price and Kerryn Brewer.

Price and Brewer scored the best result for an all-female crew in the race’s history, sharing a Perkins Engineering-run Castrol Cougars Holden to 11th place.

A second team is also said to be close to confirming a wildcard, which would bring the total entries for the race to 27.

V8 Supercars earlier this year announced that any Dunlop Series outfit that purchases a Car of the Future chassis will receive an entry into the championship’s showpiece event.