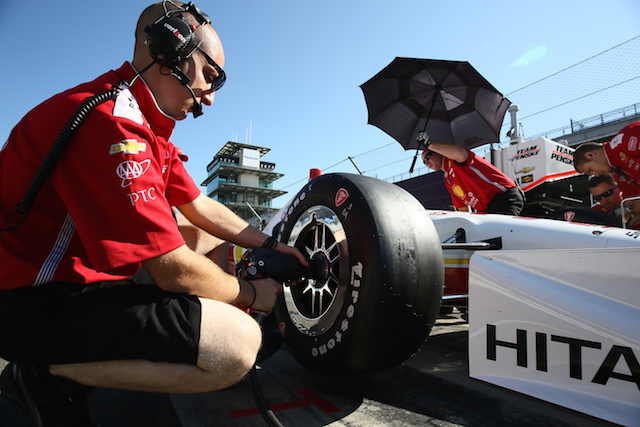 Helio Castroneves and Marco Andretti have shouldered the bulk of the running for Firestone’s annual tyre test at the Indianapolis Motor Speedway.

Castroneves (Team Penske Chevrolet) and Andretti (Andretti Autosport Honda) covered 70 percent of the single-day running over a total of 200 laps.

“Every time you have an opportunity to be here, especially with helping Firestone develop even better tyres, it’s important,” the three-time Indy 500 winner Castroneves said.

Firestone’s annual Indy test has taken on more meaning in the build-up to the 100th running of the famous race on May 29 next year.

The company’s association with ‘The Brickyard’ goes back to the inaugural running of the world’s most famous oval race in 1911.

“The beauty of working with Firestone is they try all the details, and that’s why we’re here,” Castroneves said.

“It’s about grip – left side and right side – and what line you can take, and they really want your feedback after every run.”

Crucial to the tests are the introduction of revised aerodynamic bodywork components and an expected rise in lap pace next year.

Firestone says that no matter what the data indicates, driver feedback remains the most valuable feedback.

A huge amount of data and feedback will be processed before Firestone begin to construct the tyre that will be used for the landmark 2016 Indy 500.