Will Davison is eyeing an outing at the Australian GT Championship Highlands 101 finale as he prepares for a Bathurst 12 Hour return next year.

The Erebus Motorsport V8 Supercar driver is the latest to signal his interest in competing at February’s Mount Panorama GT3 endurance classic following V8 Supercars’ takeover of the growing event.

Now available after a clash with the V8 Supercars pre-season test ruled him out this year, the 32-year-old is confident he will be on the 12 Hour grid next year, with Erebus his most likely option.

Although yet to secure a deal for the event, Davison is weighing up a return to GT racing in the Erebus Mercedes SLS at New Zealand’s Highlands Motorsport Park (November 13-15) to aid his 12 Hour preparations. 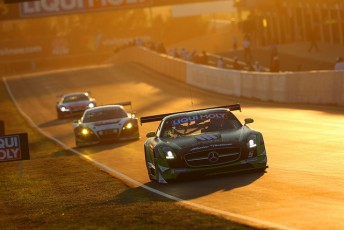 “My hand is well and truly up (for Bathurst) and I’m talking to the Erebus guys about doing the Highlands 101,” Davison told Speedcafe.com.

“Highlands was brought up at Queensland Raceway and I was asked if I want to do it, so I have just got to have a look at a few minor details.

“It always helps for Bathurst preparation and the more laps you can do in those cars the better.

“They know how keen I am to do the GT stuff I made that clear from day one.

“I’m pretty comfortable that it will all proceed with Erebus so I will have a chat to them soon about it and what their plans are.”

V8 Supercars stars Craig Lowndes, Garth Tander and Shane van Gisbergen are among those to have shown strong interest in competing in next year’s Bathurst 12 Hour.

Prodrive’s David Reynolds is so far the only main game driver confirmed for the event after revealing plans to team up with Tony Walls in his McLaren 650S GT3.